Replacement of the cylinder head gasket for the ZMZ-405, ZMZ-406 engine

Usually, the head gasket is replaced with the following damage:

The head of the block can be removed with the receiver and exhaust manifold.

If the head of the block is removed from the engine installed on the car, you must first perform the following operations: 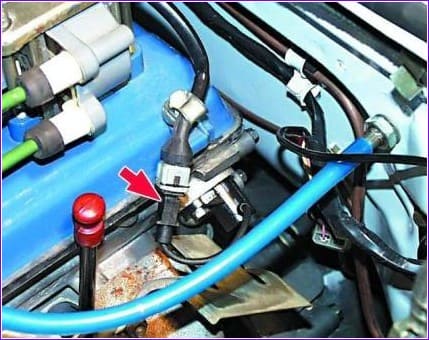 Disconnect the phase sensor plug from the wiring harness. 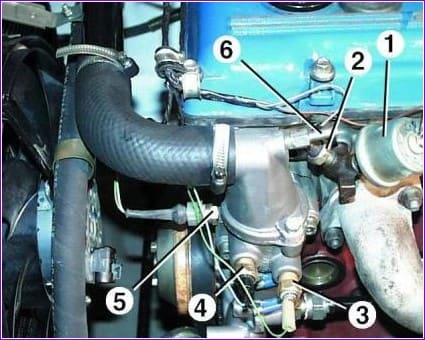 Unscrew the screws and disconnect the wires from the sensors for oil pressure indicator 1 and emergency oil pressure 2.

Loosen the clamp and remove the hose to the expansion tank from fitting 6 of the thermostat. 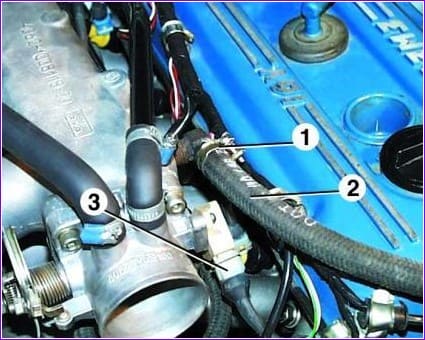 Loosen clamp 1 and remove hose 2 from the fitting to the non-return valve of the brake booster.

Unscrew nut 1 and remove the blue ground wire from the stud at the front end of the receiver. 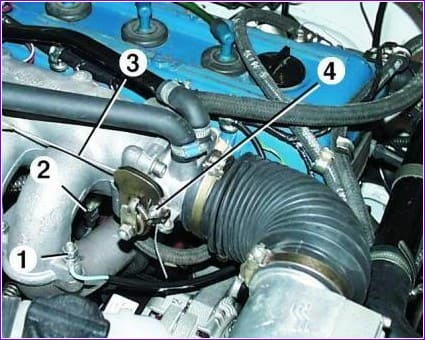 Unscrew nut 4 and pull accelerator cable 3 out of the air throttle actuator sector.

Disconnect from the wiring harness plug 2, located between the engine intake pipes, the speed sensor and crankshaft synchronization, installed near the crankshaft pulley ring gear. 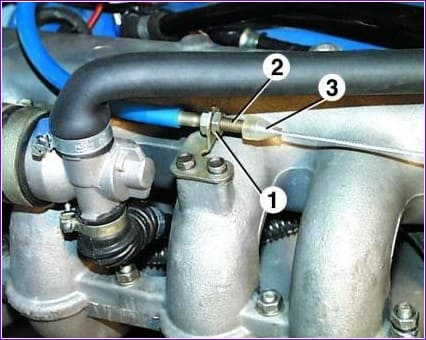 Slide the cable gland 3 from the threaded lug 2 of the cable sheath, unscrew the nut 1 securing the cable lug and pull the lug 2 out of the bracket fixed to the engine intake pipe by sliding it back. 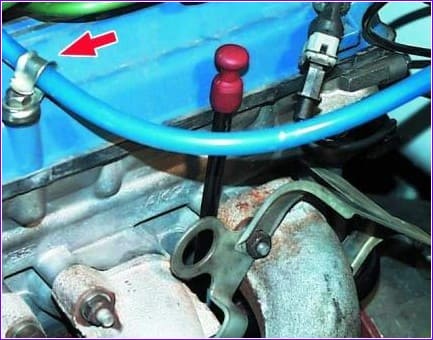 Then pull the accelerator cable upwards out of the bracket.

Pull back the accelerator cable holder and remove the cable from it.

Move the accelerator cable away from the engine.

Disconnect the wires from the generator. 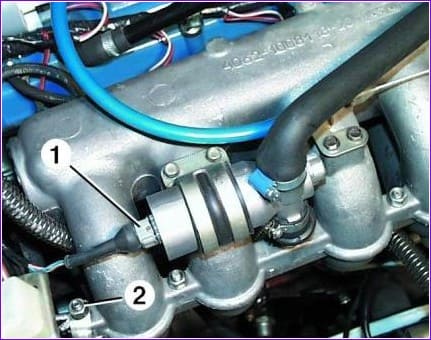 Unscrew nut 2 and remove the ground wires from the stud at the rear end of the receiver. 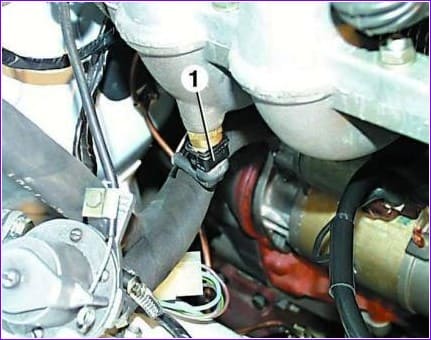 Unbend 2 harness holders and remove the harness from the holders.

Move the wiring harness away from the engine. 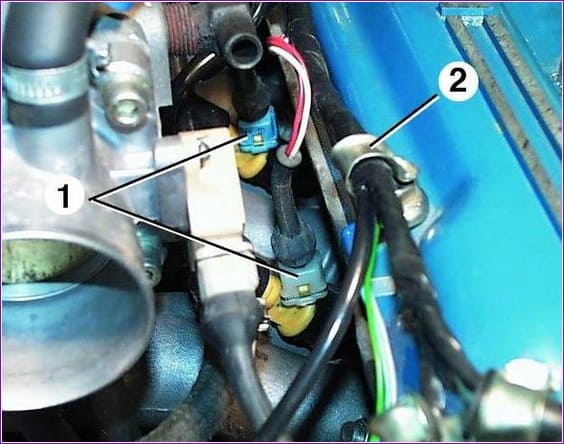 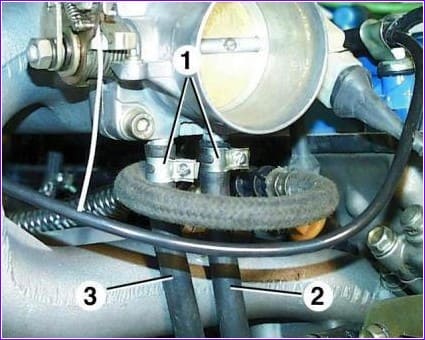 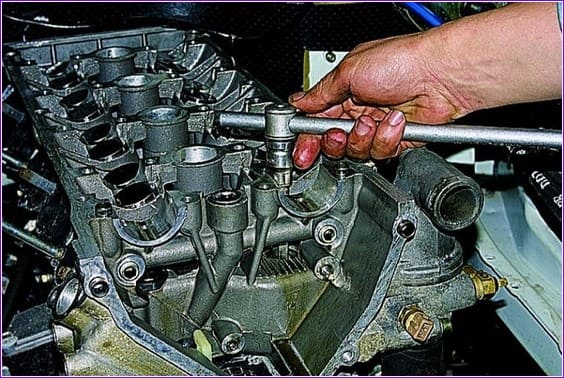 With a “12” hex wrench, we loosen the tightening of ten bolts, after which we unscrew and ... 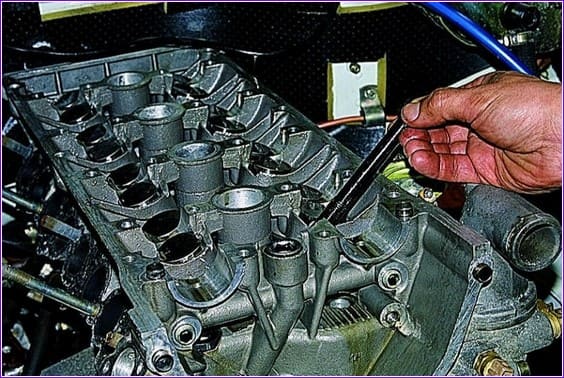 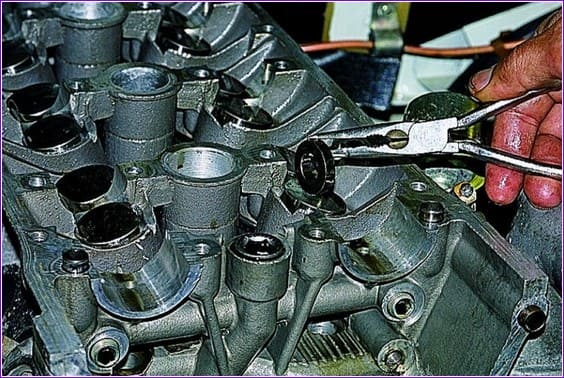 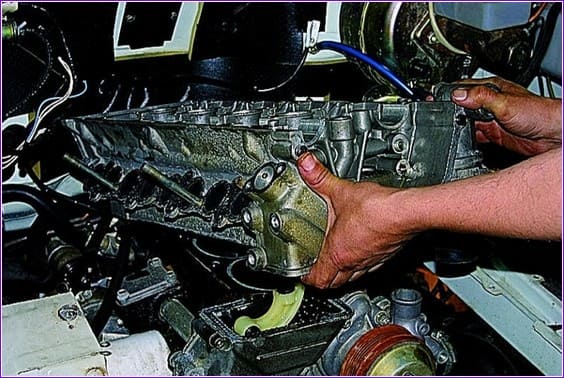 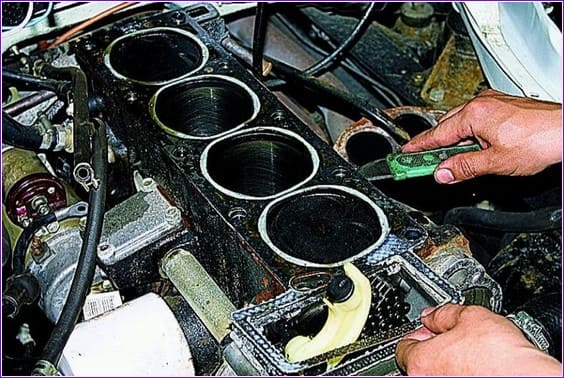 Separate and remove the head gasket

Before installation, the adjacent surfaces of the head and block must be cleaned of sealant and gasket residues.

Conduct a general inspection of the cylinder head.

Check with a metal ruler and feeler gauges if the flatness of the surface of the head adjacent to the block is broken.

If the gap exceeds 0.1 mm, the head needs to be replaced. 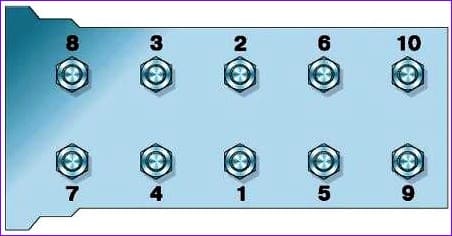