Assembly of the VAZ-2123 engine 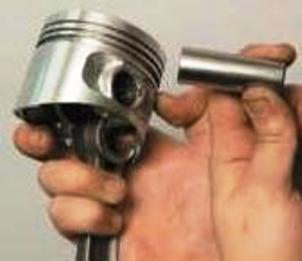 Use your hand to push your finger, lubricated with engine oil, into the holes of the piston and connecting rod. 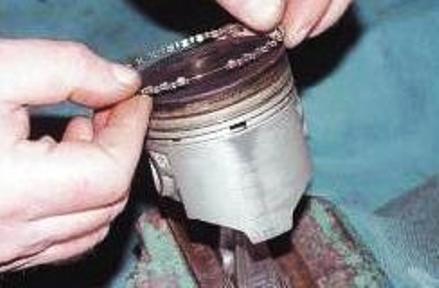 Install the piston rings in the reverse order of removal.

When installing, do not expand the rings more than necessary so as not to deform or break them.

Install the lower compression ring with the undercut (shown by the arrow) down into the second groove.

If the ring is marked "Top" or "TOP", then install the ring with the mark up (towards the piston bottom). 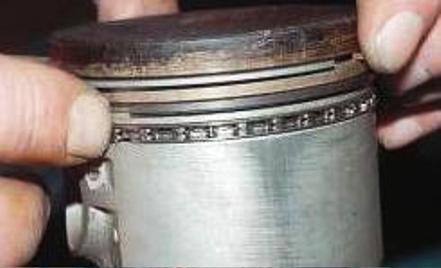 Orient the rings. Install the rings on the remaining pistons.

Orient the rings as follows:

Lay the upper main bearing shells (with grooves) in the bed of the cylinder block.

Install the inserts so that the insertion tab of the insert is aligned with the notch on the bed.

In the bed and the cover of the middle bearing, lay the liners of a larger width (without a groove).

Lubricate the liners with engine oil.

Install the crankshaft into the cylinder block.

Place the lower (without groove) shells in the main bearing caps.

Lubricate the liners in the crankshaft main bearing caps with engine oil.

Install the caps (except the rear) of the main bearings and lubricate the thrust half rings with engine oil.

Install the covers in the same block in accordance with the marks, orienting them in the same direction as before disassembly. 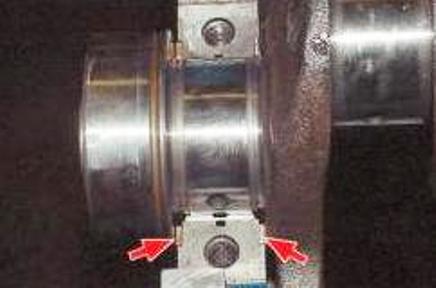 Install the rear (ceramic, yellow) and front (steel-aluminum) thrust half rings of the rear crankshaft support. 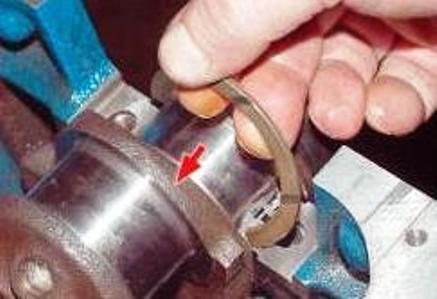 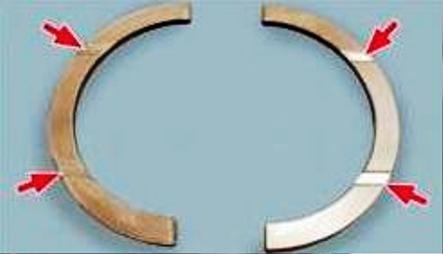 Install the rear main bearing cap and cap bolts and tighten with a torque wrench.

The maximum allowable gap is 0.35 mm.

If the gap is larger, replace the thrust half rings with others increased by 0.127 mm.

Check for proper assembly by turning the crankshaft a few turns by hand.

The shaft should rotate freely and smoothly.

Install the ring compression tool on the piston and tighten the screw to compress the rings. 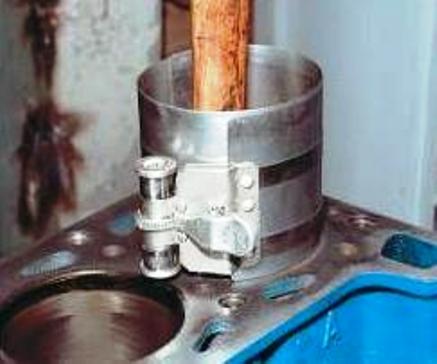 Install the piston in the cylinder in accordance with the marking of the cylinder number on the connecting rod, press (for example, with a hammer handle) on the piston and slide it from the mandrel into the center cylindr. 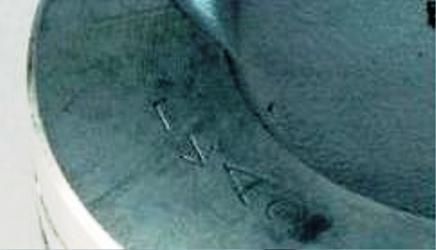 Similarly, install the pistons in the remaining cylinders.

When installing pistons into cylinders, the arrow on the piston must point towards the front of the engine 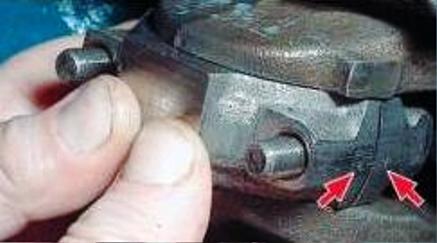 Tighten the connecting rod bolt nuts with a torque wrench. 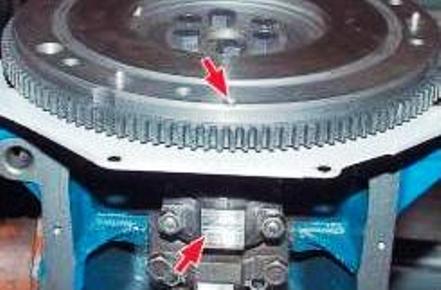 Install the flywheel (after installing the front cover of the clutch housing) so that the mark (cone-shaped hole) near the rim is against the axis of the connecting rod journal of the fourth cylinder, and secure the flywheel by tightening its fastening bolts.

Tighten the head bolts in four steps in a specific sequence (see "How to replace cylinder head gasket VAZ-2123).

Remove the sprocket and, without changing the position of the shaft, install the bearing housing on the cylinder head.

Fix the housing by tightening the nuts in a certain sequence (see "How to replace the camshaft VAZ-2123).

Put the chain on the sprocket without changing the position of the crankshaft.

Put the chain on the sprocket of the oil pump drive roller and, pulling the drive branch, install the sprocket on the roller without completely tightening the bolt of its fastening.

Attach the wire to the chain and lift the chain up in the drive cavity (or hook it on top and lift it up).

Put the chain on the camshaft sprocket, tension the drive branch and install the sprocket on the shaft, ensuring that the mark on the sprocket and the lug on the bearing housing match and do not completely tighten the bolt of its fastening.

Install the chain tensioner (if removed when disassembling the cylinder head).

Turn the crankshaft two turns in the direction of rotation to obtain the correct chain tension.

If the marks do not match, reinstall the chain. 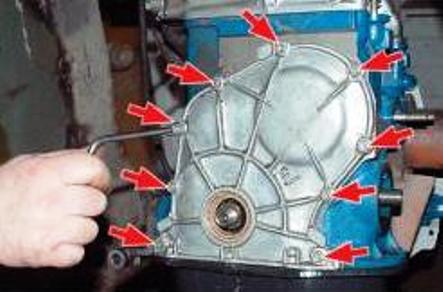 Center the holder relative to the shaft flange with a special mandrel (if there is no mandrel, center the holder along the working edge of the stuffing box, temporarily installing pulleys on the crankshaft shank) and tighten the bolts and nuts securing the cover.

The bolts that simultaneously secure the power steering pump bracket must be tightened after the pump is installed.

Install the rest of the parts and assemblies in the reverse order of removal.

Run the engine in the following sequence:

Make sure that the throttle actuator is adjusted correctly, fill in oil and coolant, check the tightness of all connections.

Start the engine and let it run unloaded for the next cycle.

Do not bring the engine to maximum speed.

During operation, check the tightness of the engine and its systems, oil pressure, ignition setting, idle speed, pay attention to the presence of extraneous noise.

If abnormal noises or other malfunctions are found, stop the engine and eliminate their cause.

After starting the operation of the car, follow the regimes provided for the break-in period of a new car.