The engine camshaft is driven by a toothed belt 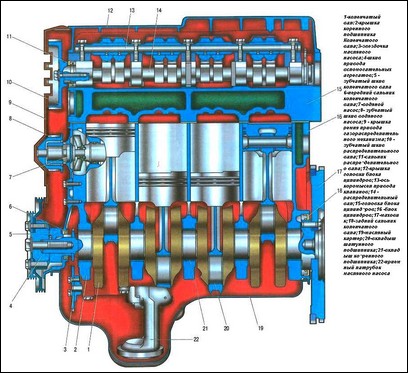 The valves are driven from the camshaft using rocker arms, resting on one shoulder on the camshaft cams and having bolts on the other shoulder to adjust the clearances in the valve mechanism with locknuts acting on the ends of the valve stems

Engines with a single overhead camshaft, five bearings, have two valves per cylinder. 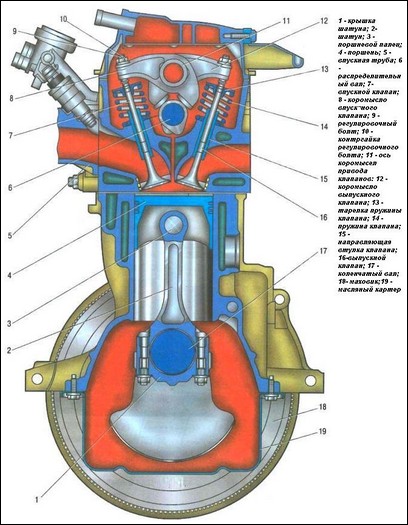 The camshafts of both engines are driven by reinforced toothed belts, the engine valves are driven from the camshafts using rocker arms, resting on one shoulder on the camshaft cams and having bolts on the other shoulder for adjusting clearances in the valve mechanism with locknuts acting on the ends of the rods valves.

Cylinder heads 15 (see Fig. 1) of both engines are made of aluminum alloy according to the transverse cylinder scavenging pattern (inlet and outlet channels are located on opposite sides of the head)

Saddles and guide bushings 1З (see Fig. 2) of the valves are pressed into the heads. The inlet and outlet 16 valves each have one spring 14 fixed through the plate 13 with two crackers.

Axle 11 of the rocker arms 8 and 12 of the intake and exhaust valves, respectively, is bolted to the upper plane of the block head.

In holes in; On the arms of the rocker arms, bolts 9 locked with locknuts 10 are installed to adjust the clearances in the valve drive mechanism, resting on the ends of the valve stems.

Camshaft 14 is installed in a bed of bearings made in the body of the head, and is fixed from axial movement by a thrust flange.

The plane of the separation of the head and cylinder block is sealed with a gasket, which is a plate molded from sheet metal.

Cylinder blocks 16 (see Fig. 1) of both engines are a single casting that forms the cylinders, the cooling jacket, the upper part of the crankcase, and five crankshaft bearings made in the form of crankcase partitions.

Blocks are made of special high-strength cast iron with cylinders bored directly in the body of the block.

The 2 main bearing caps are machined complete with blocks and are not interchangeable.

Cylinder blocks have special lugs, flanges and holes for attaching parts, components and assemblies, as well as channels of the main oil line.

The crankshaft 1 rotates in main bearings having thin-walled steel liners 20 and 21 with an anti-friction layer.

The axial movement of the crankshaft is limited by two half rings installed in the grooves of the bed of the middle main bearing.

Flywheel 17, cast iron, mounted on the rear end of the crankshaft and secured with six bolts. A toothed rim is pressed onto the flywheel for starting the engine with a starter

In addition, the flywheel has a ring gear that ensures the operation of the top dead center sensor of the engine control system

Pistons (fig. 3) are made of aluminum alloy. On the cylindrical surface of the piston head there are annular grooves for the oil scraper and two compression rings.

Piston pins 3 (see Fig. 2) are installed in the piston bosses with a gap and are pressed with an interference fit into the upper heads of the connecting rods, which are connected by their lower heads to the connecting rod journals of the crankshaft through thin-walled liners, similar in design to the main ones. 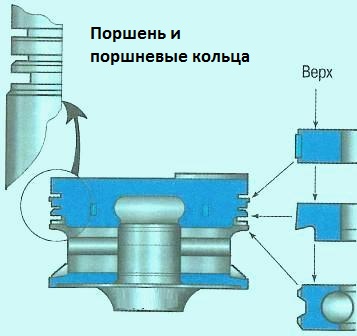 The closed-type crankcase ventilation system does not communicate directly with the atmosphere sphere, therefore, simultaneously with the suction of gases in the crankcase, a vacuum is formed in all engine operating modes, which increases the reliability of various engine seals and reduces the emission of toxic substances into the atmosphere,

The system consists of two branches, large and small.

When the engine is idling and under low load conditions, when the vacuum in the intake pipe is high, crankcase gases are sucked in by the intake pipe along the small branch of the system.

The engine cooling system is hermetically sealed, with an expansion tank, which is made from a cooling jacket made in casting and surrounding the cylinders in the block, the combustion chambers and gas channels in the cylinder head.

Forced circulation of the coolant is provided by a centrifugal water pump 7 (see Fig. 1) driven by a crankshaft timing belt.

To maintain the normal operating temperature of the coolant, a thermostat is installed in the cooling system, which blocks a large circle of the system when the engine is cold and the coolant temperature is low. 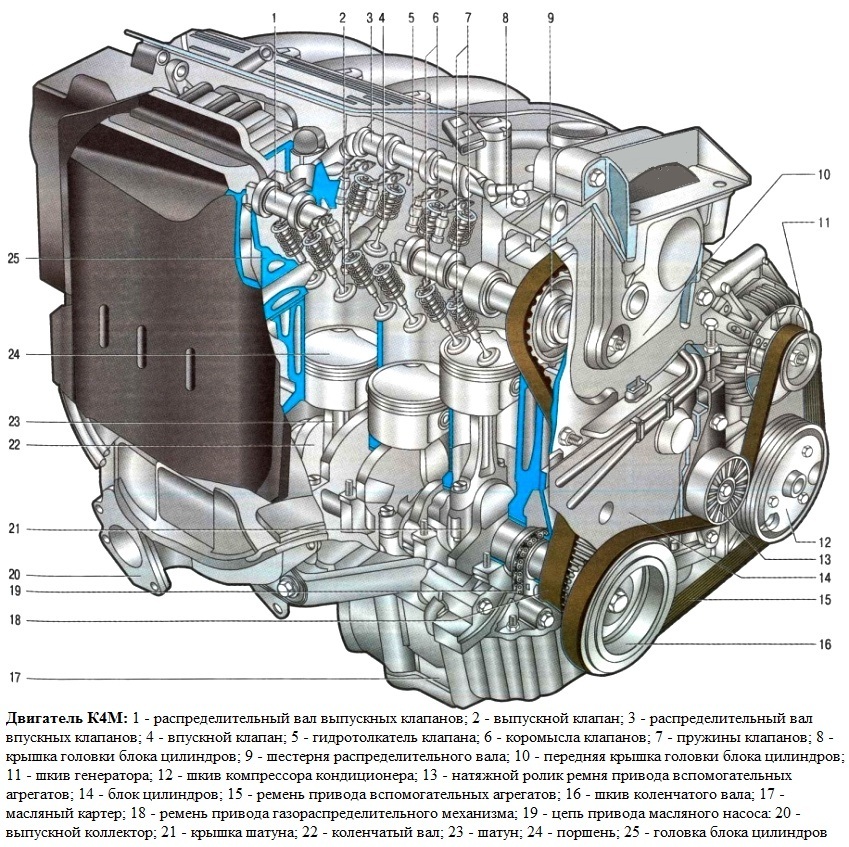 The main difference between the K4M engine and the K7J and K7M engines is the presence of a cylinder head with two camshafts (inlet and exhaust valves separately).

The camshafts are driven by a reinforced toothed belt.

Hydraulic pushers automatically ensure backlash-free contact of the camshaft cam with the valve.

The lubrication, cooling, and power systems are also similar in design.

For each cylinder of the K4M engine, four ignition coils are installed, which are directly controlled by the electronic control unit (ECU) of the engine.

Moreover, there are no high-voltage wires, and the ignition coils are mounted directly on the spark plugs.

The power unit (engine with gearbox, clutch and final drive) is mounted on three supports with elastic rubber elements - two upper side (right and left) bearings the bulk of the power unit, and a rear one that compensates for the torque from the transmission and load that occur when starting the car, accelerating and braking;