Description of the assembly of the ZMZ-402 engine

Before assembling the engine, it is necessary to clean all its parts from carbon deposits and resinous deposits

It is impossible to wash parts made of aluminum alloys (cylinder block and head, pistons, etc.) in alkaline solutions, as these solutions corrode aluminum.

The following solutions are recommended for cleaning parts from carbon deposits:

When assembling the engine, observe the following conditions:

All permanent connections, such as cylinder block plugs, etc., must be placed on nitro varnish.

The following are not allowed to be installed on the engine:

Assemble the engine in the following order:

Put the cork back in place; 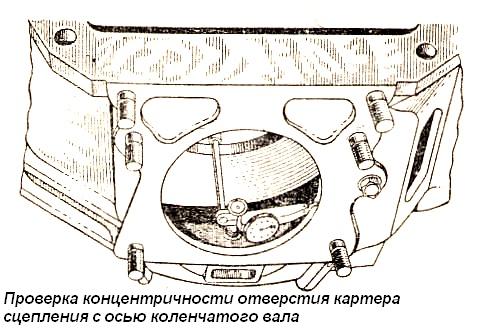 A crankshaft is installed in the cylinder block on the outer bearings, to the flange of which the indicator rack is attached.

By rotating the crankshaft, check the runout of the holes for the centering shoulder of the gearbox, as well as the perpendicularity of the rear end of the clutch housing relative to the axis of the crankshaft, as shown in fig. 1 and fig. 2.

The runout of the crankcase and end faces should not exceed 0.08 mm.

If the runout of the hole exceeds the specified value, you should loosen the bolts securing the crankcase to the cylinder block, and with light blows on the crankcase flange, achieve its correct installation; 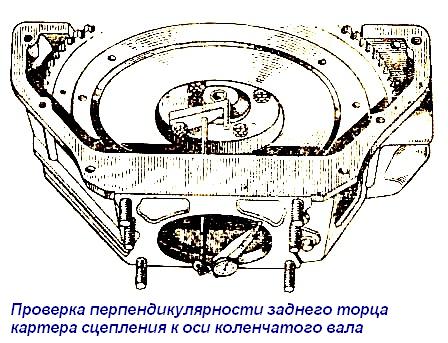 The diameter of the hole should be such that no blackness remains in the expanded holes.

After that, pins are pressed into the holes, the diameter of which is 0.015-0.051 mm larger than the size of the holes;

It should be borne in mind that when checking the above described, it is necessary to use unworn crankshaft and liners.

Worn parts will give incorrect results; 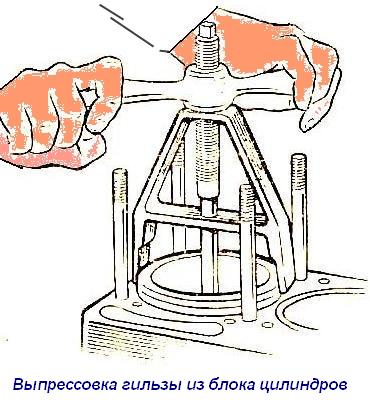 The sleeve should enter the cylinder block freely, without effort;

- fix the sleeve with a holder from falling out. 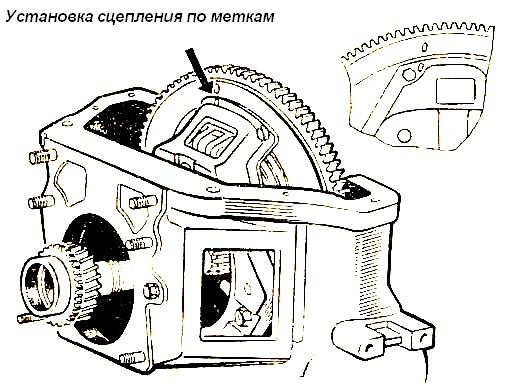 When replacing defective or worn liners with new or repaired ones, their position in the cylinder block is not oriented.

When using - worn cylinder liners, as well as each time new piston rings are installed in worn liners, it is necessary to bore on the machine or with a scraper an unworn belt above the upper compression ring.

It is necessary to remove the metal flush with the worn part of the sleeve;

- cut off two packings of the crankshaft rear main bearing oil seal (120 mm long each) from the cord, put them in the oil seal block and holder; 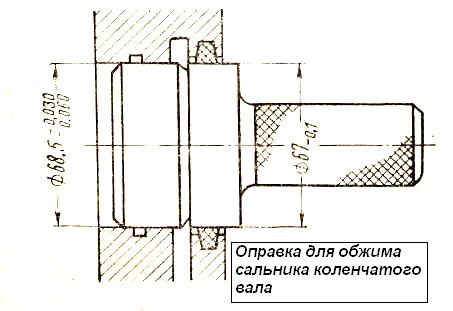 Rinse and blow out the oil channels and cavities of the dirt traps with compressed air, screw in and seal the plugs;

screw the clutch pressure plate assembly with the casing to the flywheel, having previously centered the driven plate with a mandrel (you can use the drive shaft of the gearbox) through the hole in the bearing in the rear end of the crankshaft.

The “O” marks embossed on the casing of the pressure plate and the flywheel near one of the holes for the casing mounting bolts (Fig. 4) must be aligned.

Set the clutch disc in such a position that the damper faces the flywheel.

The crankshaft, flywheel and clutch are balanced as an assembly, so dynamic balancing should be done when replacing one of these parts.

Unbalance should not exceed 70 Gcm.

When balancing, excess weight is removed from the heavy side by drilling the flywheel metal at a radius of 151 mm with a 10 mm drill to a depth of no more than 12 mm.

The distance between the drilling centers must be at least 14 mm.

Node balancing should not be started if the initial imbalance is greater than 180 Gcm. In this case, it is necessary to dismantle the assembly and check the balance of each part separately;

wipe the liners of the main bearings in their bed with a clean cloth; put the liners in the bed;

When installing the front bearing cap, the tab of the crankshaft thrust bearing rear washer must fit into the groove of the cap.

The final tightening must be done with a torque wrench (torque 10-11 kGm), bend the antennae of the locking plate;

Place the gland holder in place and tighten the nuts;

You can rotate the crankshaft using the flywheel or using a device consisting of a gearbox input shaft with a square wrench welded to it or a handle with a square hole.

The device can also be used for centering when setting the home and clutch pressure plates;

The check is carried out as follows: put a screwdriver (knob, hammer handle, etc.) between the first shaft crank to the front wall of the cylinder block and, using it as a lever, press the shaft to the rear end of the engine.

Using a feeler gauge, determine the gap between the end face of the thrust bearing rear washer and the shoulder plane of the first main journal. 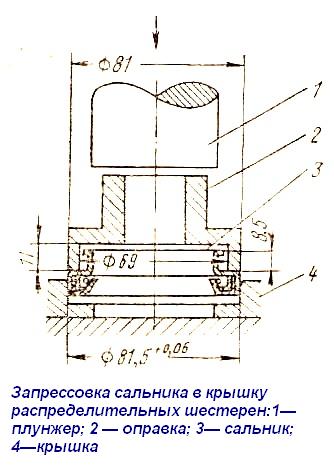 - sub-assembly of the connecting rod and piston group: 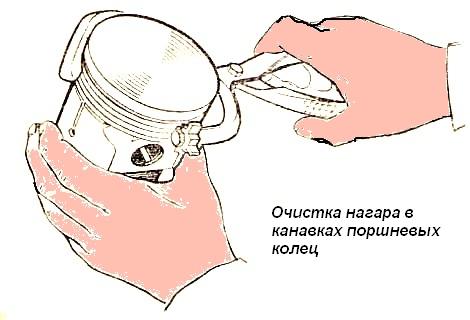 Clean the piston crowns and piston ring grooves from carbon deposits as shown in fig. 6;

Selection is checked by pulling a probe tape between the piston and cylinder using a spring steelyard.

The probe is located in a plane perpendicular to the axis of the piston pin.

The piston must be without piston rings.

Dimensional groups of pistons and sleeves

Piston pin, should be lightly oiled. 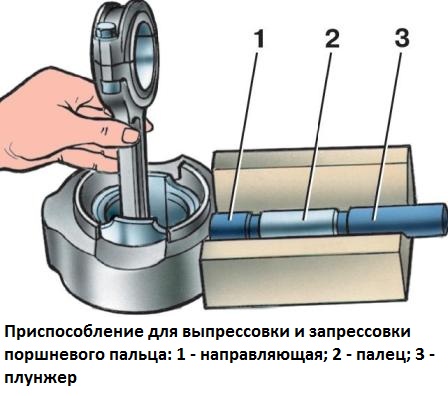 Before pressing the piston pin into it, the piston must be heated in hot water to a temperature of 70 ° C; pressing a finger against a cold piston can damage the surface of the holes in the piston bosses, as well as deformation of the piston itself.

In worn cylinders, the smallest clearance should be 0.3 mm; 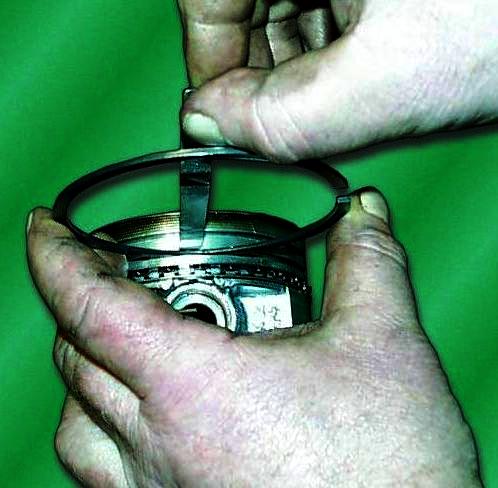 Check along the circumference of the piston at several points.

Compression rings are placed with the internal chamfer to the piston crown, as shown in fig. 12, the rings in the grooves should move freely; 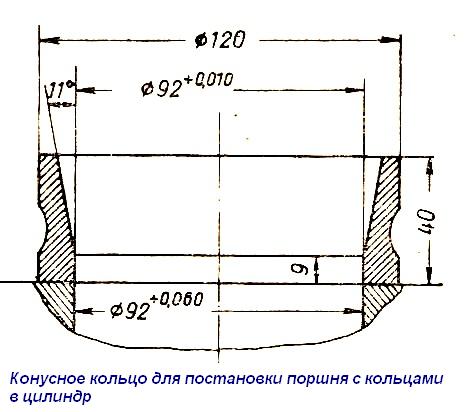 Turn the crankshaft several times, which should rotate easily with little effort;

- sub-assembly of the camshaft: 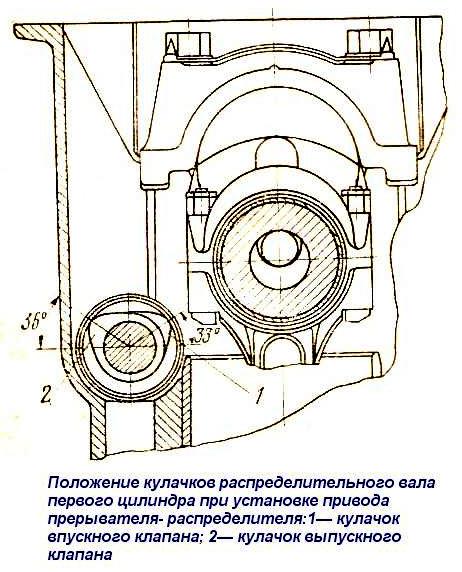 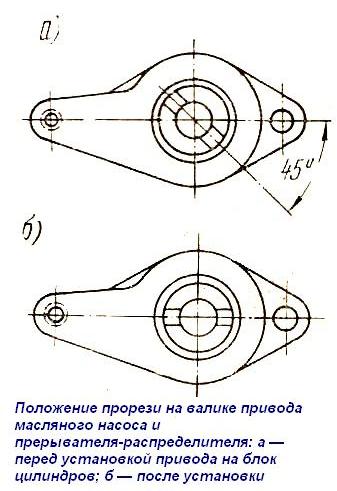 When the gears are engaged, the tooth of the crankshaft gear with the “O” mark must be against the risk at the troughs of the teeth of the camshaft gear (see Fig. 17).

The side clearance in engagement should be in the range of 0.03-0.08 mm. With a larger or smaller gap, choose another pair;

If the oil seal has worn lip seals or loosely grips the crankshaft pulley hub inserted into the oil seal, replace it with a new one. 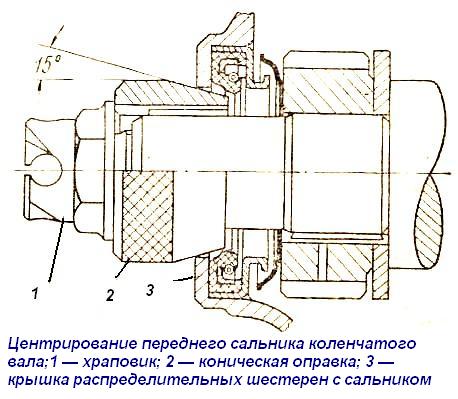 It is recommended to press the stuffing box into the cover using a mandrel on a press, as shown in fig. 10; 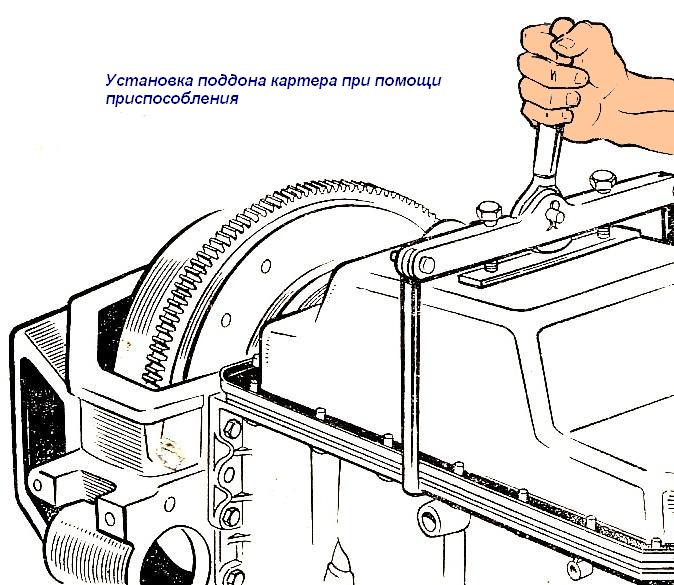 Center the cover on the front end of the crankshaft using a mandrel (Fig. 11) and tighten all the nuts and bolts of the cover.

If there is no centering mandrel, then the cover can be installed on the hub of the crankshaft pulley.

The hub must be pressed onto the crankshaft so that its end enters to a depth of 5 mm into the hole in the cover.

After that, fix the cover with nuts, maintaining the same clearance around the circumference between the hub and the opening of the cover.

Align the gap with light blows of a wooden or rubber hammer on the cover. After that, finally fix the cover;

remove the centering mandrel and press on the crankshaft pulley hub;

Turning the crankshaft by the ratchet, check if the deflector touches the cover of the timing gears due to deflector bending or a loose fit on the hub; 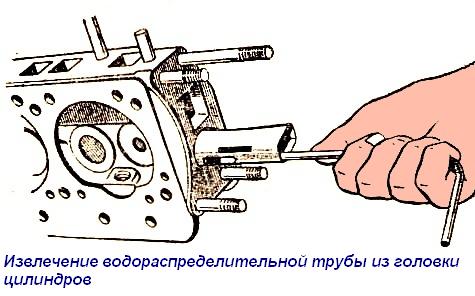 The camshaft cams, which actuate the valves of the first cylinder, must be directed with their tops in the opposite direction from the pushers (towards the oil pan) and are located symmetrically, as shown in fig. 12;

When inserting the drive into the seat, it is necessary to turn the oil pump shaft so that the end of the drive shaft enters the hole in the pump shaft,

In a properly installed drive, the slot in the shaft sleeve should be parallel to the motor axis and offset from the motor, as shown in fig. 15, b;

If for some reason only one breaker-distributor drive has been removed from the engine, it can be installed without removing the oil pan.

In this case, setting the piston of the first cylinder to c. m.t. compression stroke, when installing the drive, slightly turn the crankshaft in one direction or another.

If necessary, clean the holes in the water distribution pipe to remove it, as shown in fig. 17;

Stir the mixture thoroughly before use;

Spring force is low; it should lift the valve slightly above the seat.

When lightly pressed, the valve should sit on the seat;

Suction cup and valve surfaces must be dry and perfectly clean; 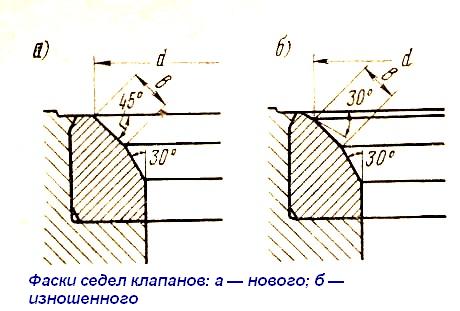 If these defects are present, it is impossible to restore the tightness of the valve with one lapping, and the seat must first be ground, and the damaged valve replaced with a new one.

Valves (for spare parts) are produced in a standard size, and guide bushings - with an inner diameter reduced by 0.3 mm (to deploy them to the final size after being pressed into the cylinder head).

The worn guide bush is pressed out using a punch (Fig. 18).

Valve seats are removed by milling with a carbide countersink.

Repair seats have an outer diameter 0.25mm larger than standard, so the seat sockets are bored to:

The valve seats and guide bushings must be cooled in carbon dioxide (dry ice) before assembly, and the cylinder head must be heated to a temperature of 160-175 ° C.

When assembling, the seats and sleeve must be inserted into the cylinder head seats freely or with light force.

After installing the seat, the metal of the cylinder head is rolled around the seat using a flat mandrel with a diameter of 49 or 41 mm, respectively, centered on the hole in the seat.

The new bushing is pressed in from the side of the rocker arms using a punch.

The sleeve after pressing should protrude 22 mm above the plane of the cylinder head. After pressing, unfold the bushing hole to a diameter of 9+0.022 mm, and grind the chamfers of the seats, centering on the hole in the bushing.

To grind the seats, you can use the tool shown in fig. 19.

The expanding mandrel is installed in the machined hole in the sleeve, and the mandrel shank serves as the axis for the grinding wheel with a chamfer at an angle of 45°.

The grinding wheel is driven by a small electric motor.

When grinding, ensure that the chamfer on the valve seat is concentric with the hole in the sleeve within 0.03 mm of the total indicator reading. 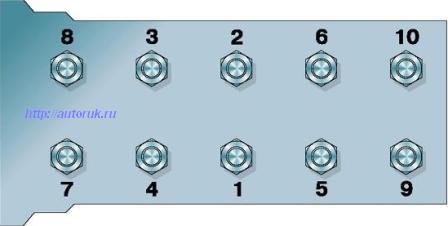 When grinding worn seats, the outer diameter of the chamfer is larger than the above dimensions.

In this case, the outer diameter of the chamfer is adjusted to the required value by grinding the end face of the seat at an angle of 30°, as shown in fig. 18, b.

After grinding the seats and lapping the valves, thoroughly clean all gas channels and blow with compressed air so that no abrasive dust remains.

The valve stems are lubricated before assembly with a mixture consisting of seven parts of an oil colloidal graphite preparation (GOST 5262-50) and three parts of aviation oil MS-20; 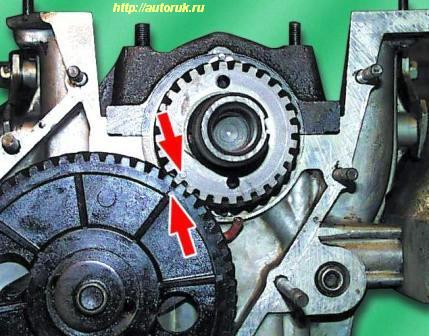 Check the tightness of the rocker bushings. In the event of a loose fit during operation, the bushing may move and block the valve lifter rod lubrication hole. Such bushings must be replaced;

The rocker arms and uprights are assembled on the axle in such a position that the offset of the holes for the mounting studs in the uprights faces the adjustment screws of the rocker arms.

The fourth (rear) rack must have a hole on the bottom plane for the passage of oil;

Adjusting screws with their spherical part should lie on the sphere of the upper tip of the rod;

This must be done as indicated in the article "Adjusting the valve clearances of the ZMZ-402 engine» ;