These automatic four-speed transmissions are compact and high-performance and are electronically controlled by ECT (Electronic Controlled Transmission).

The basic construction and operation of these boxes are the same.

The gear ratio, as well as the number of discs and springs, differ depending on the engine model. 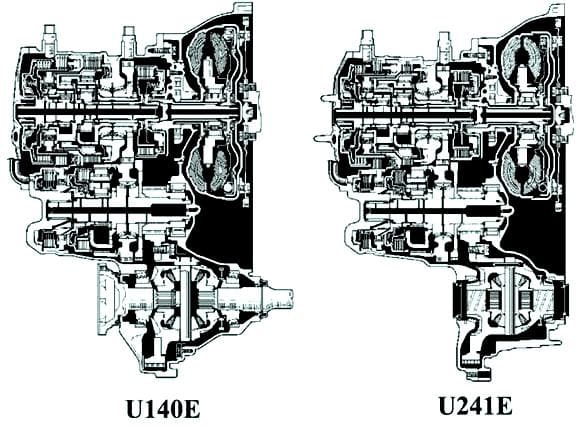 The ECU receives information about the state of the engine, driving conditions, and selects the moment of gear shifting according to road conditions, taking into account the characteristics of the driver

The result is improved fuel economy and improved transmission performance

The power from the engine through the torque converter is transmitted to the input shaft of the planetary gearbox.

Gear shifting is performed by engaging a combination of two controls, which changes the speed of the output shaft.

Elements of the planetary gearbox

Up row brake (Bo) - stops the up row sun wheel.

Overdrive Clutch #1 (F1) - When the 2nd gear brake is engaged, it prevents counterclockwise rotation of the front and rear planetary sun gears.

Forward clutch (C1) - connects the input shaft and the epicycle of the front planetary gear set.

Direct clutch (C2) - connects the input shaft and the sun gears of the front and rear planetary gear sets.

Brake for engine braking in second gear (B1) - stops the rotation of the sun gears of the front and rear planetary gear sets.

Basic pressure in the system is created by a pump, it is regulated by the control system depending on the load and speed of the vehicle, and ensures the operation of the torque converter, lockup clutches and brakes.

Drive the vehicle to allow the engine and transmission to warm up to normal operating temperature.

Stop the vehicle on level ground and apply the parking brake.

With the engine idling and the brake pedal depressed, move the shift lever alternately to all positions "P" to "L" and return to position "P".

Remove the dipstick and clean it. Insert the probe completely into the tube.

Remove the dipstick and check that the liquid level corresponds to the HOT position (fig. 5).

If there are leaks, repair or replace O-rings, seals, plugs or other parts.

Depress the accelerator pedal fully and make sure the throttle is fully open.

With the accelerator pedal fully released, loosen the adjusting nuts.

Adjust the cable so that the distance between the boot and the stopper on the cable is within the nominal range.

Tighten the adjusting nuts and recheck.