The cylinder head is usually removed to replace its gasket, valves, valve guides, repair the head, as well as for a complete engine overhaul

The cylinder head can be removed as an assembly with the reservoir, intake pipe, fuel rail and catalytic converter, or by first removing these assemblies.

Dismantling and mounting of the head must be carried out on a flyover or on a lift.

Relieve the fuel pressure in the fuel system.

Disconnect the negative terminal from the battery.

Disconnect the fuel supply hose from the fuel rail tube.

Remove the vacuum brake booster hose from the receiver pipe.

Disconnect the tips of the high-voltage wires from the spark plugs. 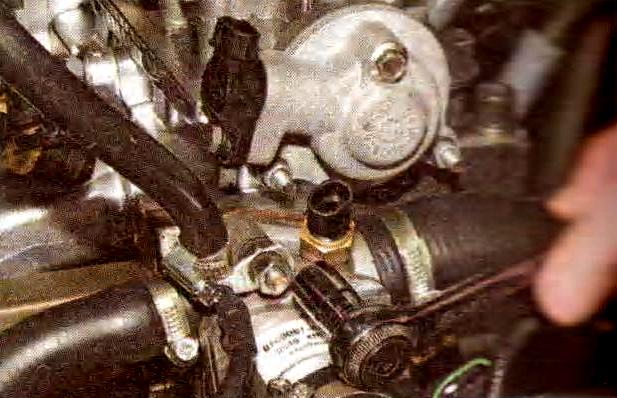 With a 13 head, unscrew the nut that secures the negative wire tip to the outlet pipe of the cooling system and remove the wire tip from the stud. 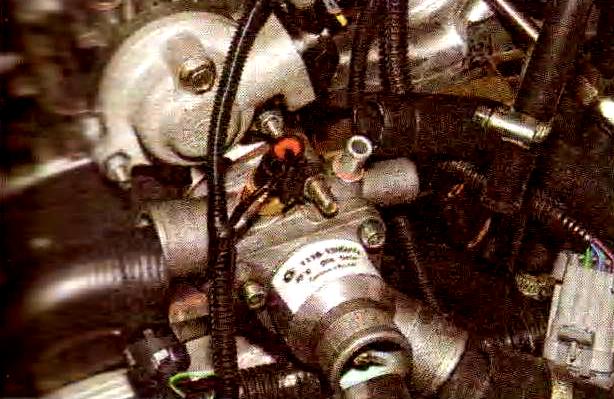 Loosen the clamps, remove the cooling system hoses from the outlet pipe and from the thermostat housing

Remove from the fittings of the throttle assembly the hose that drains the coolant from the assembly heating unit and the hose of the canister purge solenoid valve.

Disconnect the air supply hose from the nozzle of the throttle assembly.

Disconnect the wire blocks from the sensors for the coolant temperature gauge and emergency oil pressure.

Disconnect the additional muffler pipe from the collector. 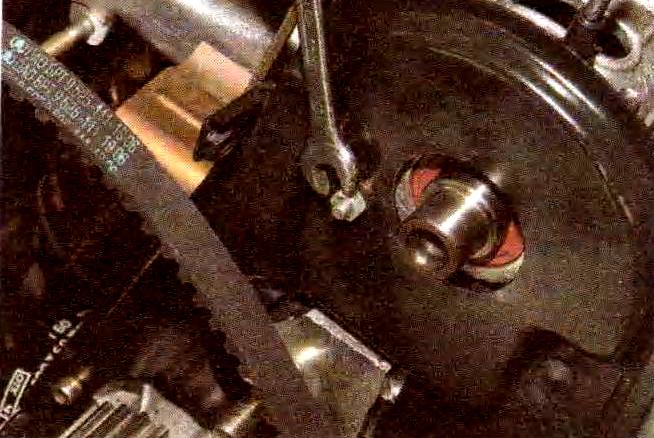 Using the “10” key, unscrew the nut of the upper fastening of the rear cover of the timing belt. 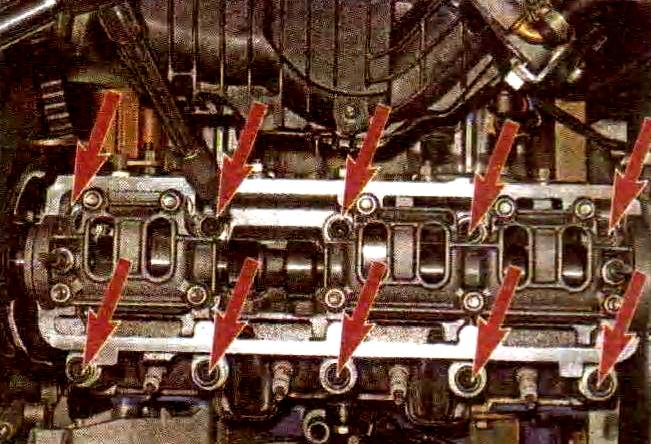 Remove the screws with washers. 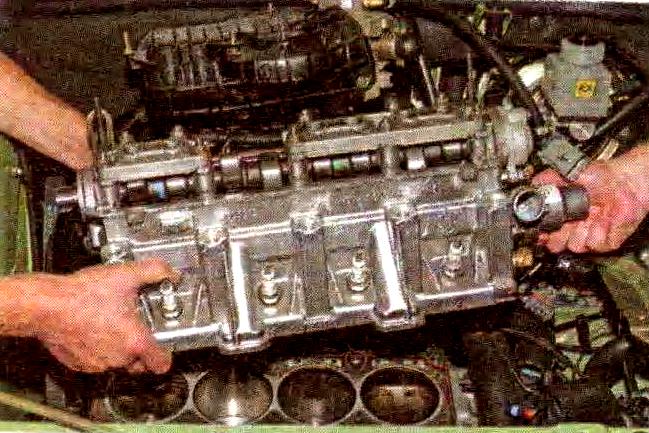 Remove the cylinder head assembly with the receiver, intake pipe, fuel rail and collector (it is more convenient to remove the head with an assistant). 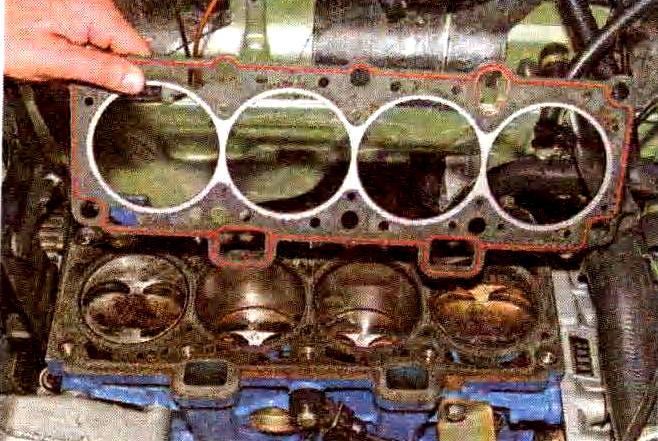 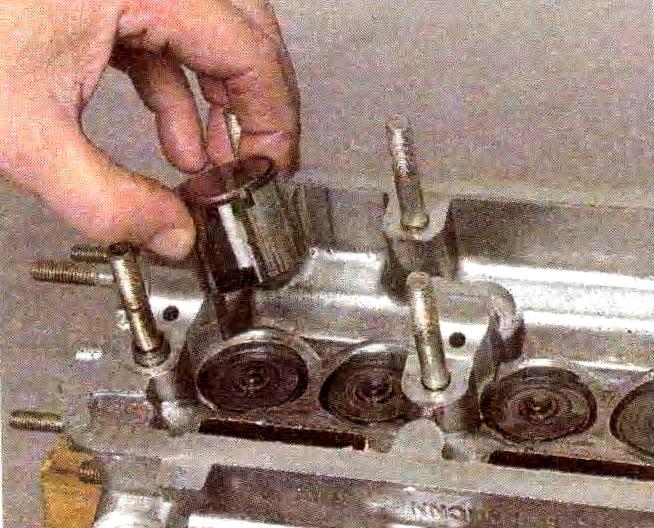 Having marked the installation location, we remove the valve lifters with shims from the sockets of the cylinder head. 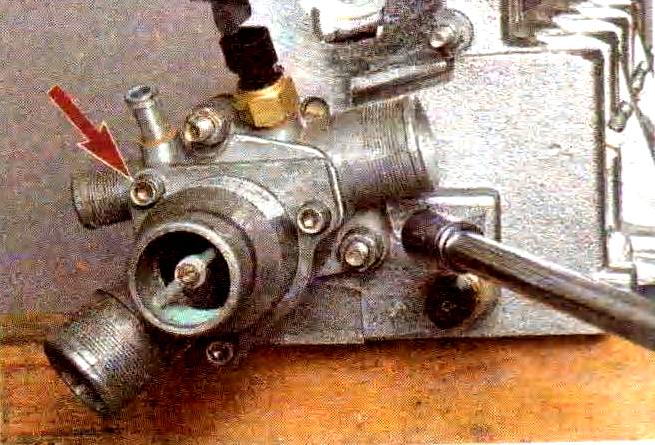 With a “13” head, we unscrew the two nuts securing the exhaust pipe. 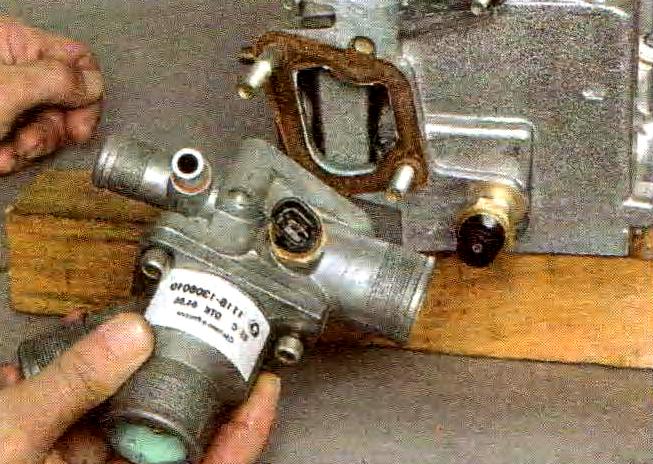 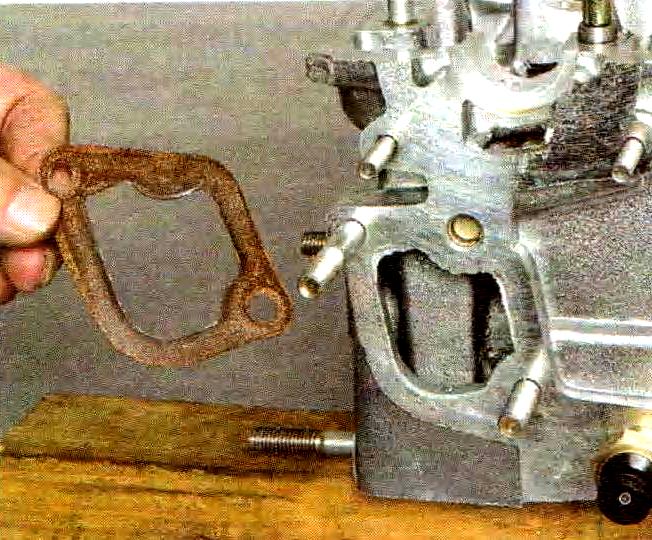 Mark the valves with a marker. 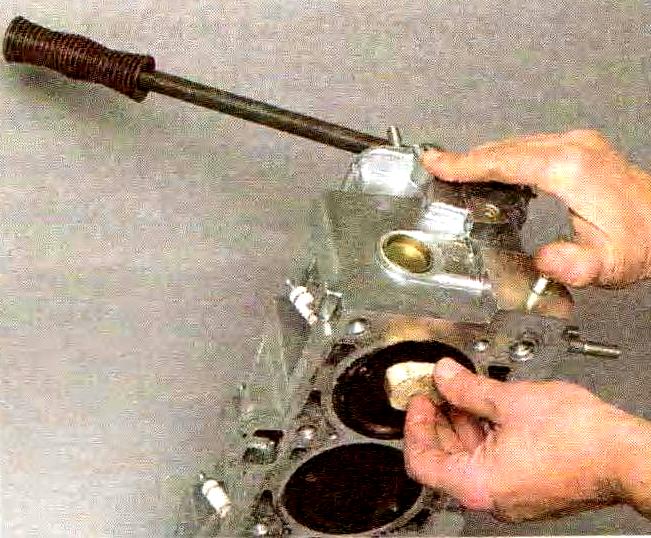 When disassembling the valve mechanism, we put a stop (wooden block) under the plate of the valve being dried out.

Remove the valve from the guide sleeve. 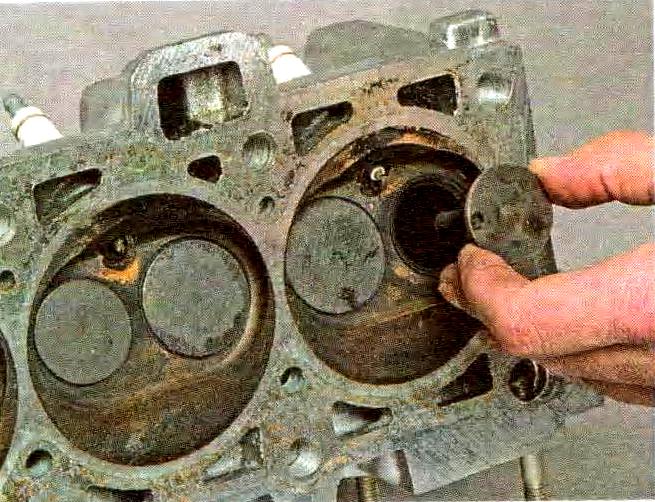 Similarly, we dismantle other valves.

Before assembling the cylinder head, we remove carbon deposits from the surface of the combustion chambers with a metal brush.

We wash the cylinder head with kerosene and blow the oil channels with compressed air.

We assemble and install the cylinder head in the reverse order.

Before installing the valves, we clean them of carbon deposits and apply a thin layer of engine oil to the valve stems.

We clean the mating surfaces of the cylinder block, head and exhaust pipe from the remnants of old gaskets, dirt and oil.

We remove oil and coolant from the threaded holes of the cylinder block for the head screws. 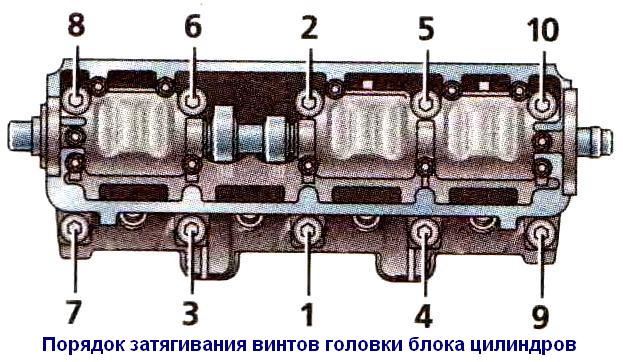 We install a new cylinder head gasket and the head itself along two centering bushings.

We install the fastening screws and tighten them in four stages according to the scheme:

The cylinder head screws can only be reinstalled if they have extended to a maximum length of 135.5 mm. If the length is longer, replace the screws with new ones.