How to check and replace the hydraulic pusher of the valve actuator ZMZ-405, ZMZ-406

Hydraulic pushers of the engine ZMZ-406, ZMZ-405, made in the form of cylindrical pushers and located between the camshaft and valves, combine two functions:

Thus, constant contact of the pusher (valve drive lever) with the camshaft cam without play is ensured.

This eliminates the need to adjust the valves during maintenance.

The principle of operation of the hydraulic pusher is shown in Figure 2.

Oil under pressure necessary for the operation of the hydraulic pusher is supplied to its internal cavities "A" and "B" from the channel "C" of the engine lubrication system through the side hole in the pusher 6, made in the annular groove of its cylindrical surface.

When the valve 1 is closed, the pusher 6 (through the plunger 7) and the sleeve 9 are pressed by the expanding force of the spring 8, respectively, to the cam 5 of the camshaft and the end of the valve stem.

The pressure in the cavities "A" and "B" is the same, the check valve 3 of the hydraulic compensator is pressed against the seat in the plunger 7 by the spring 2 - there are no gaps in the valve mechanism. 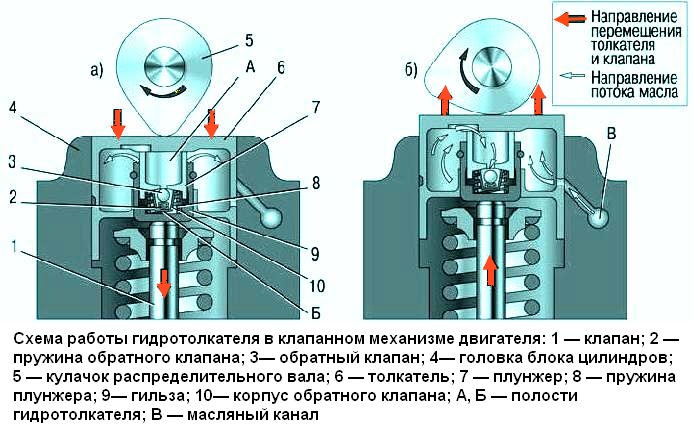 When the camshaft rotates, the cam 5 runs into the pusher 6, moving it and the associated plunger 7.

Moving the plunger 7 in the sleeve 9 leads to a sharp increase in pressure in the cavity "B".

Despite small oil leaks through the gap between the plunger and the sleeve, the pusher 6 and sleeve 9 move in one piece and open valve 1.

With further rotation of the camshaft, cam 5 reduces the pressure on the pusher 6 and the oil pressure in cavity "B" becomes lower than in cavity "A".

Return valve 3 opens and passes oil from cavity "A", connected to the engine oil line, into cavity "B".

The pressure in the cavity "B" increases, the sleeve 9 and the plunger 7, moving relative to each other, select the gap in the valve mechanism.

The pressure of the oil supplied to the hydraulic pushers is regulated by a special valve installed in the cylinder head.

To eliminate them, calibrated compensation holes are provided in the engine oil supply channels, which provide automatic purge of the cavities of the hydraulic pushers.

Almost all malfunctions of hydraulic pushers are diagnosed by the characteristic noise emitted by the gas distribution mechanism in various engine operating modes.

Noise from valves can sometimes be eliminated by slightly turning the spring or valve around the longitudinal axis.

To do this, do the following.

If the valve and spring are in good condition, and the knock of the valves is still heard when the engine is running, the hydraulic pusher is faulty.

Replace it with the following. 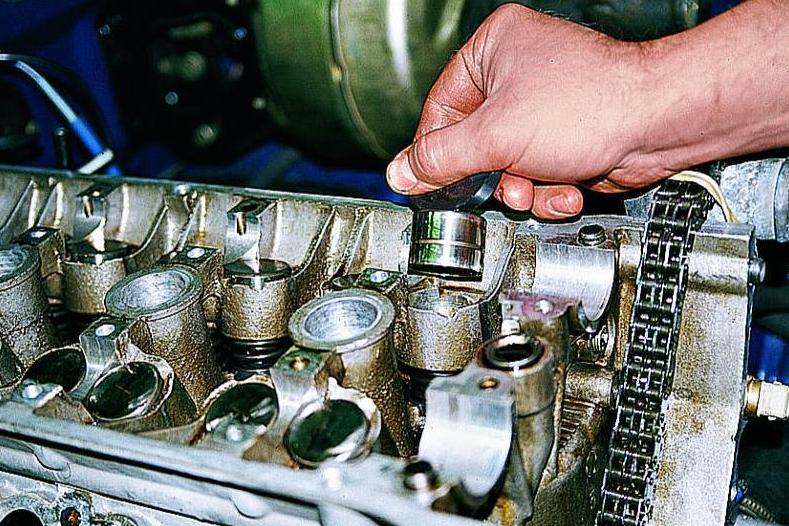 Before installing, put the new hydraulic tappet in a container with engine oil, press the tappet sleeve several times to remove air and fill it with oil.

- Oil leakage from part of the hydraulic pushers during parking

The noise that disappears a few seconds after starting the engine is not a sign of a malfunction, since oil leaked out from a part of the hydraulic pushers that were under the load of the valve springs of the open valves (the oil supply channels remained open), the lack of which is replenished at the start of the engine operation

Clean the parts of the mechanism from dirt. Use the oil recommended in the owner's manual

Increased noise during idling of a warm engine, disappearing at an increased crankshaft speed and completely absent on a cold engine:

Increased noise that occurs at high crankshaft speed and disappears at low speed:

Bring the oil level in the oil sump to normal

Bring the oil level up to normal

Constant noise from one or more valves, independent of engine speed:

After removing the valve cover, install the camshaft cams one by one with the projections up and check for a gap between the pushers and the cams.

Sinking (for example, with a wooden wedge) the pusher of the checked hydraulic compensator, compare the speed of its movement with the speed of the others.

If there is a gap or an increased travel speed, replace the compensator.

After starting a cold engine, there may be a knock on the valve lifters, which should disappear as the engine warms up to a coolant temperature of plus 80 ... 90 ° C.

If the knocking does not disappear more than 30 minutes after reaching the specified temperature, it is necessary to check the serviceability of the hydraulic pushers as indicated below.

The following steps are recommended to remove air:

In 90% of cases, the knocking should stop,

If the knocking has not disappeared after 5 cycles plus 15 minutes of engine operation, the following work must be done:

Replace hydraulic pushers with the above signs.

In the absence of the above remarks, remove all hydraulic tappets from the cylinder head seats and check the appearance of the hydraulic tappets, camshaft cams for rough scratches, cracks, wear marks, foreign particles, contamination.

Replace hydraulic pushers located in places localized by a stethoscope.