On the ZMZ0-402 type engine, an ignition distributor sensor (1908.3706) is installed - contactless, with a sensor (generator) of control pulses and built-in vacuum and centrifugal ignition timing controllers

The distributor sensor performs two functions: it sets the moment of sparking and distributes high voltage pulses to the cylinders in accordance with the order of their operation.

For this purpose, a slider is used, put on the shaft of the distribution sensor.

An interference suppression resistor is installed in the slider.

Set the crankshaft to the position corresponding to the ignition timing of 5°. 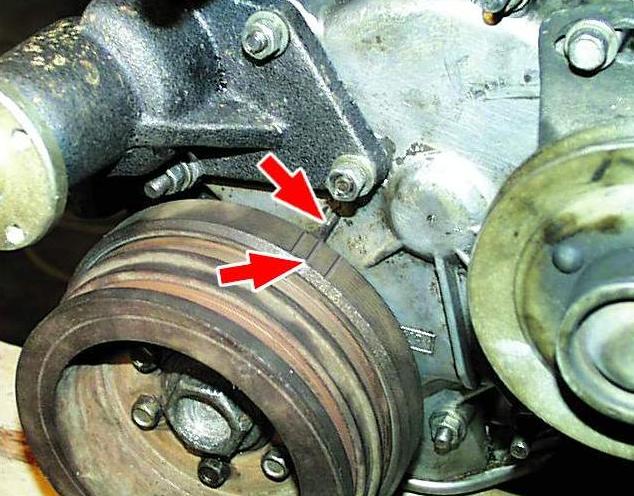 To do this, on the ZMZ-402 engine (Fig. 1), we combine the middle mark on its pulley with the tide on the block cover (the end of the compression stroke of the first cylinder).

For the UMZ-4215 engine (Fig. 2), we set the first mark on the pulley against the pin on the timing gear cover. 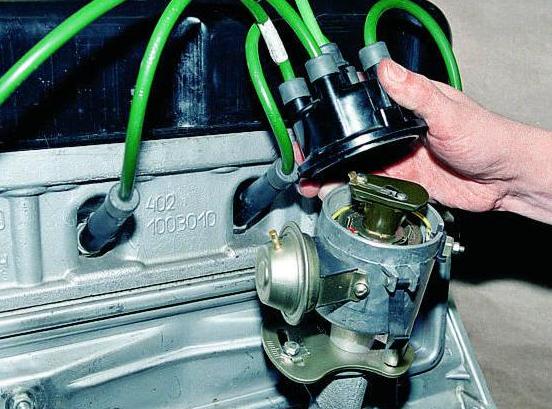 Otherwise, turn out the candle of the first cylinder. After closing the hole with a paper stopper, rotate the crankshaft. The air that has been pushed out of the plug will indicate the start of the compression stroke. 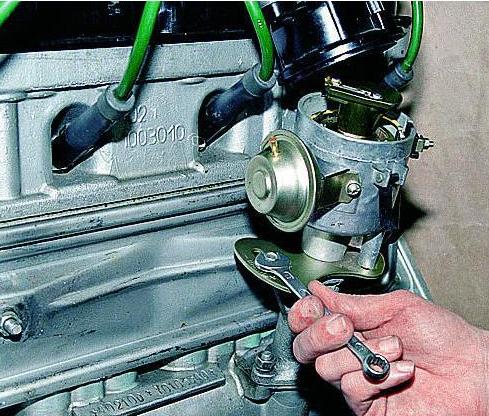 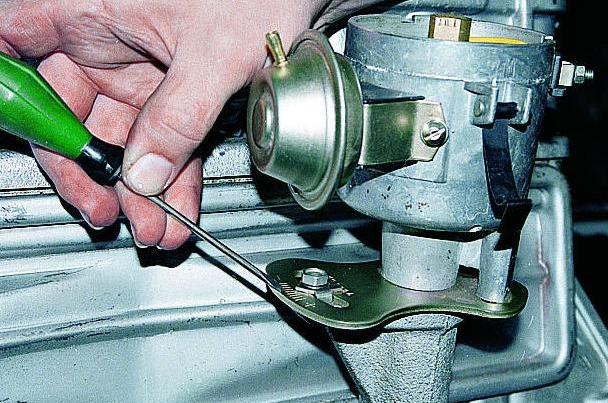 Set its scale to zero division (middle of the scale) (Fig. 5).

Use the “10” key to loosen the screw securing the octane corrector plate (Fig. 6).

Turning the housing of the distribution sensor, we combine the "marks" (the red risk on the rotor and the arrow on the stator).

Holding the sensor in this position, tighten the screw (Fig. 7).

Make sure the slider is against the contact of the first cylinder cover and check that the high voltage wires of the remaining cylinders are connected correctly - counting counterclockwise from the first cylinder in the order of 1-2-4-3.

After you have done everything, check the correct ignition timing while driving.

We start the engine, warm it up and when we have already switched to fourth gear at a speed of 50 - 60 km / h, we sharply press the gas.

If, at the same time, detonation (it sounds like a knock of valves) appears briefly - for 1-3 seconds - the ignition moment is selected correctly.

Prolonged detonation indicates an excessive ignition timing, reduce it by one division with an octane corrector.

The absence of detonation requires an increase in the ignition timing, after which the test must be repeated.

Technical characteristics of the ignition system

The direction of rotation of the distributor rotor is counterclockwise

Resistance of the tip of the candle, kOhm 4–7

Resistance of the central contact of the cover*, kOhm 8–13

* On part of the sensors, instead of a resistor, a cover with a central carbon