When performing work that requires complete draining of the liquid from the cooling system, be sure to flush the system with clean water, blow with compressed air to remove residual water

Fill with coolant, bleed the system and measure its actual frost resistance

The system must provide frost resistance:

According to the manufacturer's recommendation, the coolant should be changed after six years of operation or 90,000 km, whichever comes first

Replace the coolant on a cold engine 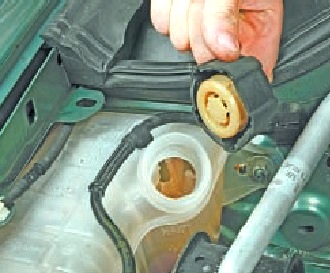 Open the cap of the expansion tank 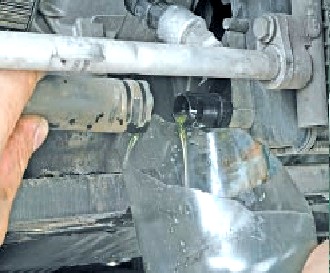 After draining the coolant, put the hose on the pipe 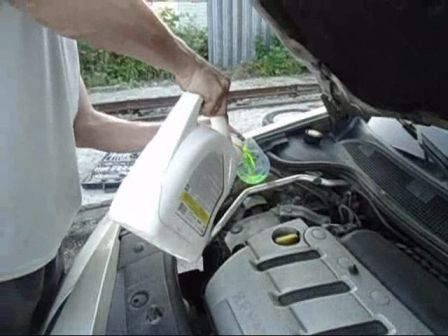 Start the engine and warm it up to operating temperature (before turning on the fan).

After that, stop the engine and check the coolant level

If necessary, add it to the expansion tank to the “max” mark

When the engine is running, you need to monitor the temperature of the coolant according to the pointer

If the pointer has reached the overheating zone, and the radiator fan has not turned on, turn on the heater and check how much air passes through it

If the heater supplies heated air, the fan is most likely defective, and if it supplies cold air, then an air lock has formed in the engine cooling system.

To remove the air lock, turn off the engine, let it cool down, and unscrew the filler cap

Start the engine, let it run for 3-5 minutes, and close the filler cap

To better fill the system without air pockets, you need to periodically squeeze the radiator hoses by hand.

After a few days of operation of the car after replacing the coolant, you need to check its level. If necessary, add liquid.