According to the manufacturer's recommendation, the coolant should be replaced after 6 years of operation or 90 thousand kilometers, whichever comes first

You will need: coolant, a clean rag, a container for draining coolant with a capacity of at least 10 liters, pliers.

Change the coolant only when the engine is cold. Coolant is toxic, so be careful when handling it.

When starting the engine, the cap of the expansion tank must be closed.

The cooling system is under pressure when the engine is running, so coolant may leak from under a loosely screwed plug.

Put the vehicle on a level surface. 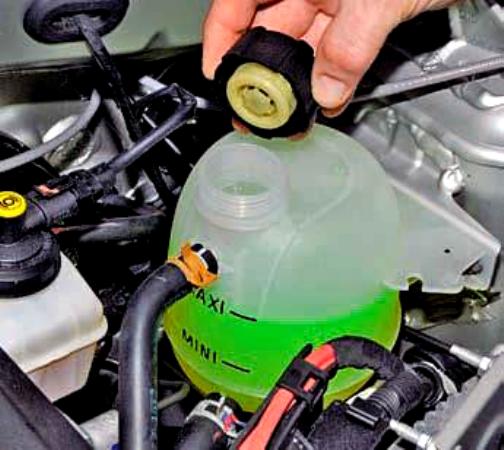 Remove the cap of the expansion tank. 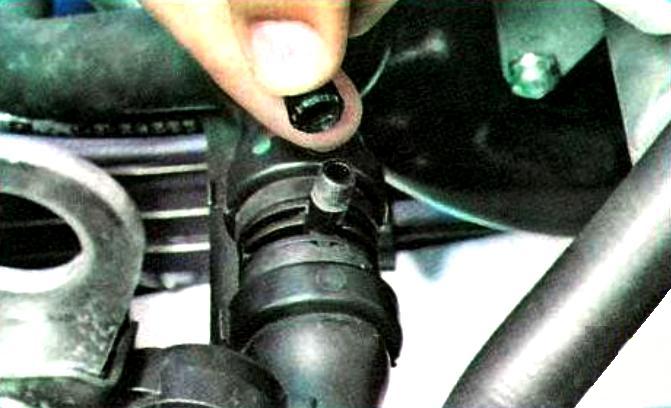 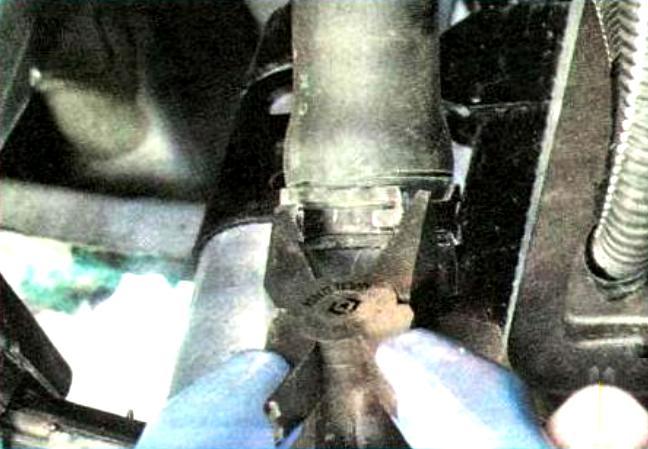 Squeezing the lower radiator hose clamp with pliers, slide the clamp along the hose ... 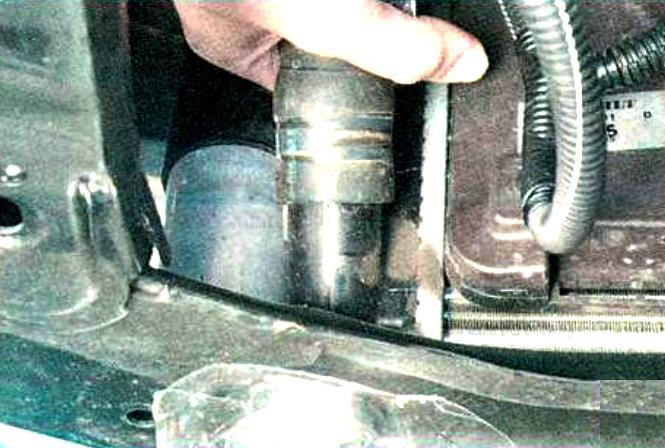 Antifreeze is deadly poisonous to all living things, so as not to pollute the environment, drain it through a funnel (for example, made from a plastic soda bottle).

After draining the coolant, screw on the air bleed valve plug.

Pour water into the expansion tank to flush the system.

Blow compressed air into the expansion tank to purge the cooling system to remove as much water as possible.

Fill up with coolant (the air bleed valve plug must be removed).

After the air stops coming out of the valve and liquid comes out of it, screw on the valve plug and the expansion tank plug.

Start the engine, bring the engine speed to 2500 min-1 and let it run until the fan turns on.

After that, turn off the engine, check the coolant level and, if necessary, add it to the expansion tank to the “MAX” mark,

While the engine is running, watch the coolant temperature using the gauge.

If the indicator scale is completely shaded and the radiator fan does not turn on, turn on the heater and check how much air passes through it.

If the heater supplies heated air.

Most likely, the fan is faulty, and if it supplies cold air, it means that an air lock has formed in the engine cooling system.

To remove it, turn off the engine, let it cool and unscrew the cap of the expansion tank.

Start the engine, let it run for 3 ~ 5 minutes, and replace the reservoir cap.

To better fill the system without air pockets, periodically squeeze the radiator hoses with your hand.

After a few days of operation of the car after replacing the coolant, check its level. Refill the level if necessary.

If after a very short time the color of the fresh liquid turns brown, it means that you filled in a fake, in which the manufacturer "forgot" to add corrosion inhibitors.

In addition, one of the signs of a fake is a sharp complete discoloration of the liquid.

The dye of high-quality coolant is very resistant and only darkens over time.

The liquid, tinted with linen blue, is discolored. This "antifreeze" needs to be replaced faster.