The arrangement of the centrifugal oil filter is shown in fig. 1. 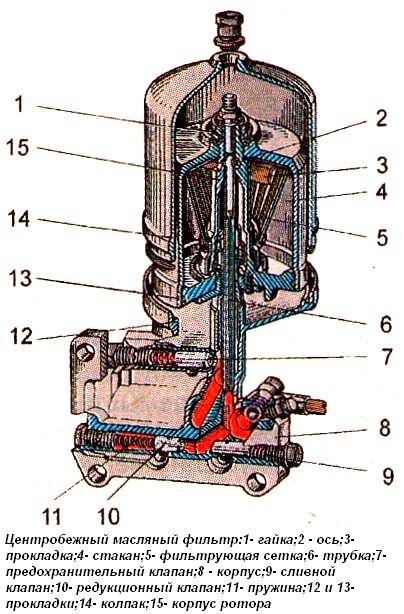 When assembling the centrifuge, clean parts must be used.

The non-flatness of the mating surface of the filter housing should not exceed 0.08 mm over the entire length.

On the surfaces of the openings of the body 5 (Fig. 2) of the rotor and cover 11, mating with the necks of the axis 9 of the rotor, traces of chemical destruction are not allowed. 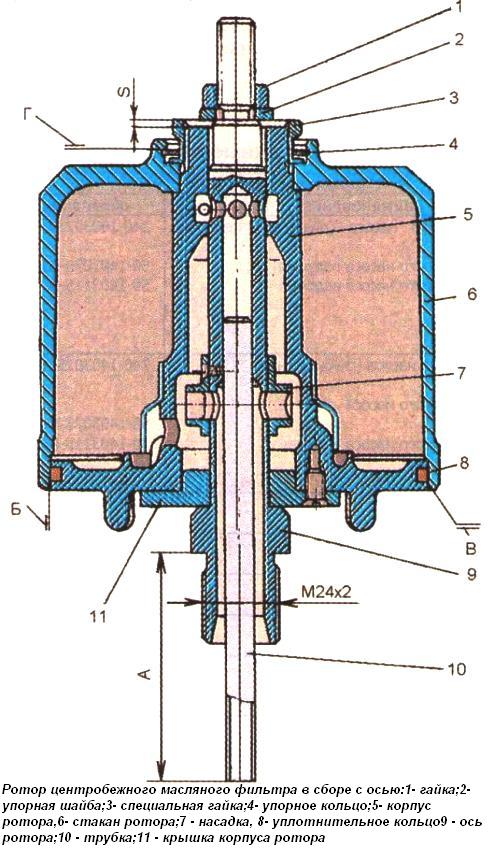 There must be no thread damage on the rotor body 5.

The surface "G" of the annular groove in the rotor cup for thrust ring 4 must not be damaged.

The non-flatness and non-parallelism of the side surfaces of the thrust ring should not exceed 0.1 mm.

On the surface "5" of the rotor housing, mating with the glass 6 of the rotor, nicks and dents are not allowed.

Out-of-roundness and tolerance of the profile of the longitudinal section of the hole in the rotor housing, under the upper neck of the rotor axis - 0.01 mm.

The rotor housing must be statically balanced. Residual imbalance - no more than 150 g-mm.

The mass must be corrected by drilling holes with a diameter of 6 mm at the end of the rotor flange to a depth of no more than 2 mm.

The cylindrical surface of the cup, mating with the surface "B" of the rotor, should not have bends and nicks.

The non-circularity of this surface is 0.2 mm.

Surface "B" of the inner chamfer of the end of the cup 6 of the rotor should not have nicks with sharp edges.

The nicks must be cleaned.

The mass must be corrected in two planes: at the upper end and at the thickening of the lower surface with a depth of no more than 2 mm. Residual unbalance is not more than 50mm.

The non-roundness and tolerance of the profile of the longitudinal section of the hole in the cover 11 of the rotor housing under the lower neck is 0.01 mm. Cracks are not allowed on the oil filter housing.

The depth of the pressure reducing valve seat in the filter housing must not exceed 52 mm.

The depth of the drain valve seat and the centrifugal filter valve seat must not exceed 72 mm at the housing.

The curvature of the spring generatrix of the drain valve and the centrifugal filter valve, lying freely on the plate, should not exceed 1 mm.

The curvature of the generatrix of the pressure reducing valve spring, lying freely on the plate, should not exceed 1 mm.

The cover 11 of the rotor housing, mounted on the rotor axis, must rotate freely by hand.

Before installing the cover, the lower journal of the rotor axle must be lubricated with engine oil.

Nicks, dents, cracks and deformation of nozzle 7 are not allowed.

Curvature of tube 10 is not allowed.

The runout of the outer surface of the end of the pressed tube relative to the average diameter of the thread M24x2 of the rotor axis should not exceed 0.3 mm.

Before installing the cover and rotor housing, the axle journals must be lubricated with engine oil.

The rotor axis must first be blown out with compressed air.

At the assembled rotor cup, the special nut 3 should turn freely by hand.

Before installing the rotor cup 6 on the rotor housing, the rubber sealing ring must be lubricated with grease or M-10G2 engine oil.

Cutting and tears of the ring are not allowed.

The rotor should rotate freely on the axis from the force of the hand, without jerking and jamming.

The filter housing must be blown with compressed air before assembly.

When installing the rotor assembly with the axle on the filter housing, the rotor axle must be tightened to a torque of 160…200 Nm.

The valves must move in the seats of the filter housing under the action of their own weight, the valves are not allowed to hang.

Tests of a centrifugal oil filter on the KI-5278 stand should be carried out on a mixture of engine oil and diesel fuel having a viscosity of 11.5-16 mm2/s (cSt) at the test temperature.

The use of other mineral oils is allowed, provided that the specified viscosity is maintained during the test.

After adjustment, the centrifugal oil filter valve should start opening at an oil pressure of 0.7±0.02 MPa.

The beginning of the opening of the drain valve should but occur at a pressure of the working fluid above the valve 0.25 ... 0.35 MPa. 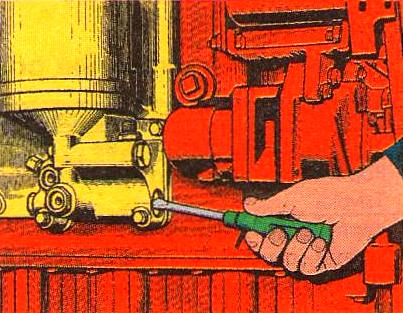 The pressure reducing valve must open at an oil pressure of 0.05 ... 0.06 MPa in front of it and with the oil bypassed to the atmosphere.

The locked rotor on the axle must be checked for tightness with an oil pressure in front of it of at least 0.8 MPa and a back pressure at the outlet of the filter of at least 0.2 MPa.

The assembled filter must be checked for tightness within 1 min at a pressure at the inlet to the filter of 0.7 ... 0.8 MPa and an outlet back pressure of at least 0.2 MPa.

At the same time, leakage or the appearance of oil drops on the outer surface of the filter and at the joints is not allowed.