Removal, disassembly of the front spring of the car Gazelle

We work together on a viewing ditch

Jacking the beam and removing the front wheel

In order not to damage the brake hose, it is advisable to remove the front brake caliper and tie it to the frame 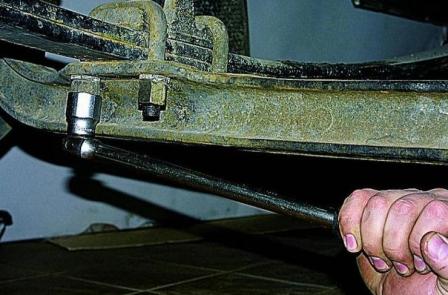 With a “24” head, we unscrew the four bolts for fastening the ladders. 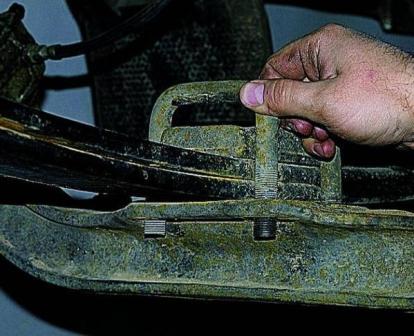 Taking out the ladders. 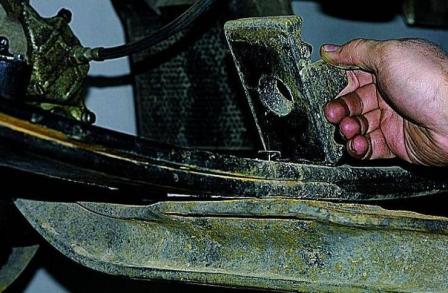 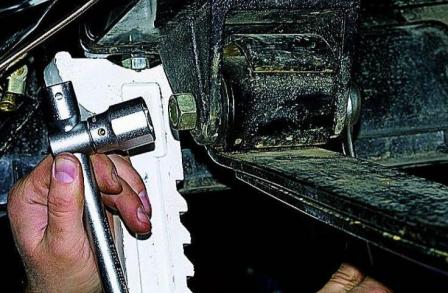 Holding the bolt of the front eyelet of the spring with the “22” key, unscrew the nut with the “24” head. 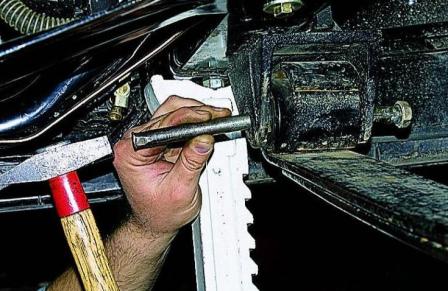 We knock out the bolt with a beard or a suitable rod. 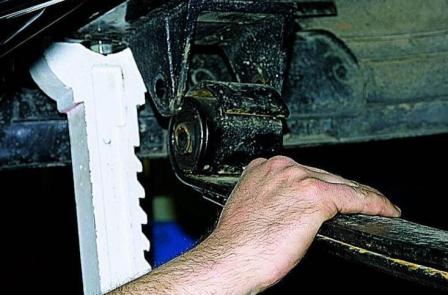 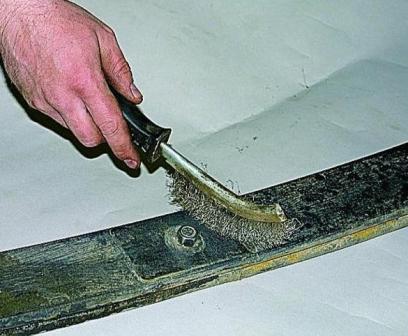 Cleaning the spring from dirt

Insert the bolts into the hinges of the spring. We stretch the cord between them and measure the spring deflection arrow 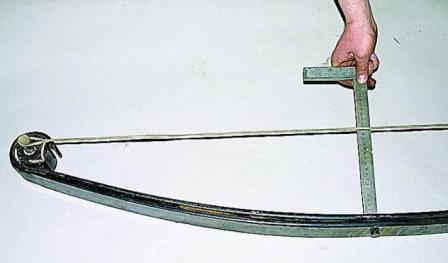 If this value is less, we replace the entire spring. 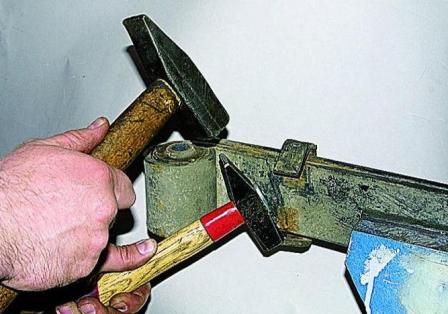 Unbend the clamp, striking with a hammer through another hammer. 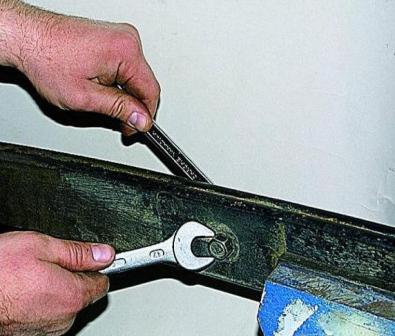 Having clamped the spring in a vise, with two “17” keys we unscrew the nut of the centering bolt and remove the bolt. 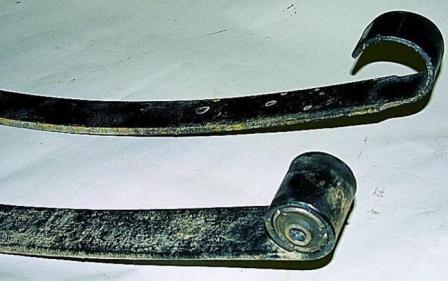 We clean the inner surfaces of the spring sheets from dirt and rust. 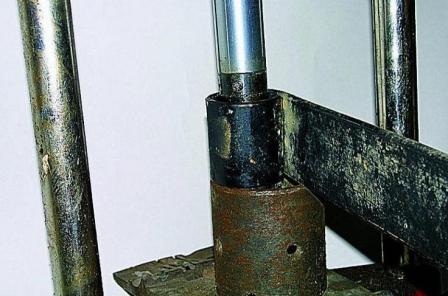 To replace the rubber-metal hinges, put the spring eyelet under the press. 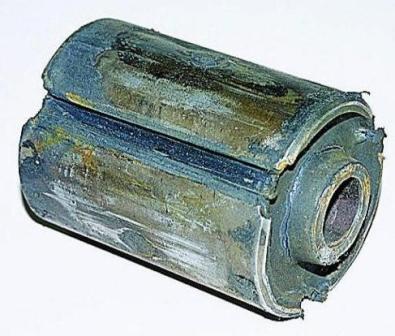 Press out the hinge. 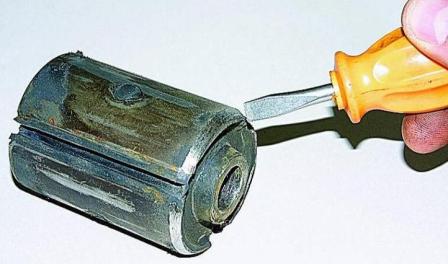 To facilitate the pressing of a new hinge with a file or an emery wheel, we make a lead-in chamfer on the edges of the metal plates from the end of the hinge.

Compress the hinge with a band clamp.

Lubricate the hinge with soapy water and, using a mandrel, press it in on the same press.

Mandrel for pressing out (pressing in) the rubber-metal hinge of the spring ears. 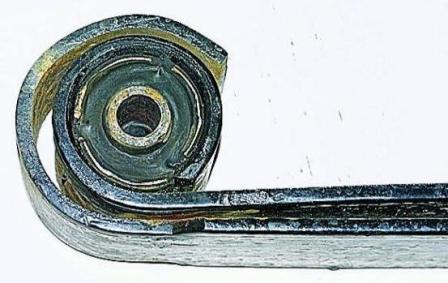 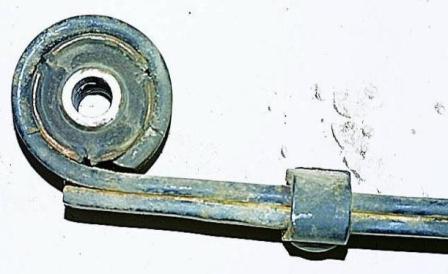 Having lubricated the sides of the sheets facing each other with graphite grease, we assemble the spring.

In this case, pay attention to the difference in the design of the front and rear lugs of the spring. 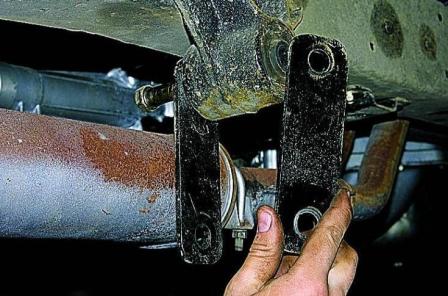 Unscrew the nut and take out the bolt of the spring earring.

Remove the plates of the spring earring. 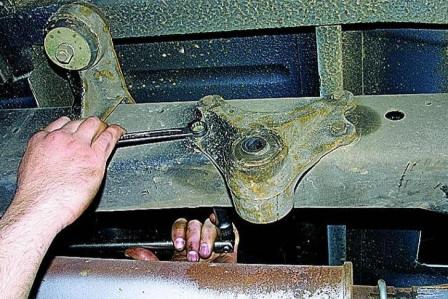 While holding the bolts of the earring bracket with the “14” key, with the “17” head, unscrew the four nuts and remove the bracket 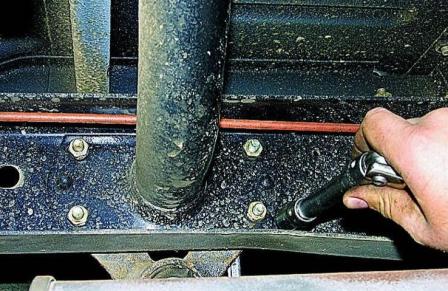 Replacing the rubber-metal hinge of the bracket 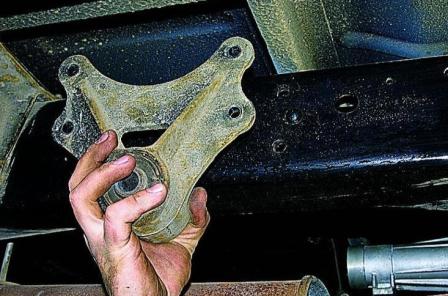 The vertical protrusion on the spring pad must face the longitudinal axis of the vehicle.

The final tightening of the nuts of the rubber-metal hinge bolts should be carried out on a loaded vehicle with straightened springs.

This is necessary for the hinges to work properly.

Similarly, we disassemble the spring and replace the rubber-metal hinges on the other side of the car. 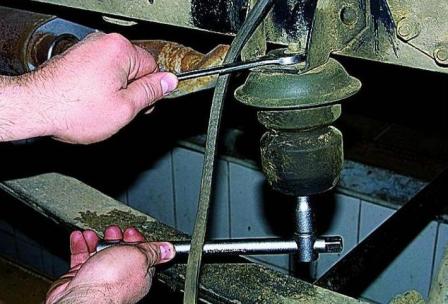 Remove the buffer together with the bolt, washer, bushing and cup

Install the buffer in reverse order.