Design features of the fuel system of a Gazelle car

Let's consider two systems, the most common ones. This is a system for a carburetor engine and a system for an engine with direct fuel injection.

The power supply system consists of a fuel tank 1, installed under the floor of the luggage compartment and connected to the fuel pump 3 by a fuel line 2, consisting of brass tubes and rubber hoses tightened with clamps.

A fuel fine filter 4 is mounted between the engine-mounted diaphragm-type fuel pump with a mechanical drive and carburetor 5.

The carburetor, in turn, is connected to the fuel tank by a fuel drain line 6, through which excess fuel supplied by the pump returns to the tank.

In addition, there is a fuel vapor removal system on the fuel tank, consisting of a rubber vapor tube and a valve installed on it.

There is a drain plug at the bottom of the fuel tank to drain the sludge.

A fundamental feature of the power supply system of the ZMZ-4062 engine is the absence of a carburetor in it, which combines the functions of mixture formation and dosing of the air-fuel mixture into the engine cylinders.

In the distributed injection system installed on this engine, these functions are separated - the nozzles carry out metered fuel injection into the intake pipe, and the air required at each moment of engine operation is supplied by a system consisting of a throttle and an idle speed controller.

The fuel injection system and the ignition system are controlled by an electronic engine control unit, which continuously monitors the engine load, the vehicle speed, the thermal state of the engine and the environment, and the optimal combustion process in the engine cylinders using appropriate sensors.

This control method makes it possible to ensure the optimal composition of the combustible mixture at each particular moment of engine operation, which allows you to get maximum power with the lowest possible fuel consumption and low exhaust gas toxicity.

At the top of the fuel tank there is a fuel intake and a fuel level sensor.

To reduce vibration, the pump bracket is attached to the floor through rubber pads.

From the pump, fuel is supplied to the fuel filter installed in the engine compartment, and from there it enters the engine fuel line attached to the engine intake pipe.

From the fuel line of the engine, fuel is injected by injectors into the intake pipe.

Excess fuel is drained to the fuel tank through a pressure reducing valve installed at the rear end of the engine fuel line. 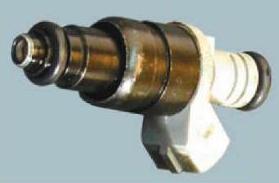 Nozzle is an electromechanical valve in which the check valve needle is pressed against the seat by a spring.

When an electrical impulse is applied from the control unit to the winding of the electromagnet, the needle rises and opens the hole atomizer through which fuel is supplied to the engine intake pipe.

The amount of fuel injected by the injector depends on the duration of the electric pulse.

Reducing valve is a container divided by a diaphragm, on which a valve is fixed, which closes the fuel drain hole under the action of a spring.

The pressure reducing valve maintains a constant pressure in the supply system of about 0.3 MPa.

The upper part of the pressure reducing valve is connected to the receiver by a vacuum hose.

When the pressure drop in the receiver is not higher than 0.3 MPa, the valve is closed, and the pressure in the supply system rises.

When the fuel pressure reaches more than 0.3 MPa, the membrane flexes, opening the hole, and excess fuel is drained into the fuel tank.

As soon as the fuel pressure drops to 0.3 MPa, the membrane returns to its original position and closes the fuel drain hole. 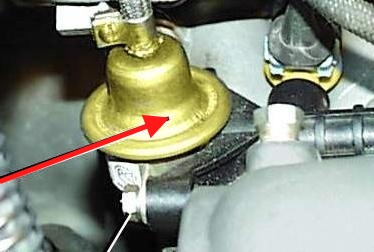 Air mass flow sensor is used to determine the amount of air entering the engine cylinders.

The signals from the sensor are sent to the engine control unit and are one of the parameters that determine the duration of fuel injection by injectors - the amount of fuel depends on the amount of air at any given moment.

The main element of the sensor is a platinum filament heated up to 150 °C during operation. 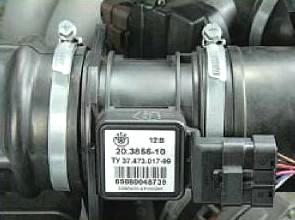 As engine intake air passes through the sensor housing, the filament cools down, and the sensor electronics constantly strive to maintain the filament temperature at 150 °C.

Electrical power spent on maintaining the temperature of the thread is a parameter by which the engine control unit determines the duration of the electrical pulse applied to the nozzles.

The degree of cooling of the platinum filament depends not only on the amount, but also on the temperature of the passing air, determined by a thermal compensation resistor, which accordingly corrects the signal supplied by the sensor to the control unit.

To provide the ability to adjust the amount of carbon monoxide in the exhaust gases at idle, the electronic module has a variable resistor, with a screw of which you can manually change the value of the signal supplied by the sensor to the electronic control unit, thereby changing the duration of the pulse supplied to the injectors, and , hence the amount of injected fuel.

To clean the platinum filament from contamination, the electronic module periodically applies an increased voltage to it, causing heating up to 1000˚ C.

At the same time, all deposits are burned.

If the sensor fails, the engine control unit turns on a backup program that ensures engine operation with somewhat degraded, but acceptable power and consumption characteristics.

At the same time, the indicator lamp in the instrument cluster lights up.

The idle speed controller is used to maintain the set idle speed of the engine during start-up, warm-up and load changes caused by the activation of auxiliary equipment. 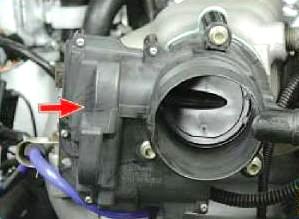 The regulator is a spool valve with electromagnetic control and serves to supply additional air to the intake pipe, bypassing the throttle.

The indicator lamp in the instrument cluster comes on.

If the idle speed is unstable and the control lamp does not light up, it is necessary to check the tightness of the connecting hoses.

Throttle position sensor, which is a dual variable semiconductor resistor, is installed on the throttle on the same axis as the throttle.

According to the signal from the sensor, the engine control unit determines the position of the throttle valve in order to calculate the duration of the electrical impulse supplied to the injectors and the optimal ignition timing. 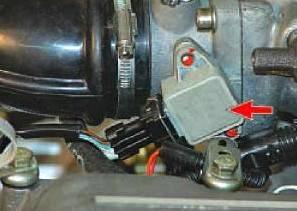 The determining signal is the value of the voltage drop across the variable resistor of the sensor, which varies depending on and on the throttle position (fully closed, partially open, fully open).

If the sensor fails, the engine control unit works according to the backup program stored in the “memory”, using data from other sensors.

At the same time, the indicator lamp in the instrument cluster lights up.

The speed and timing sensor is located at the front of the engine on the right side.

According to the signal from the sensor, the engine control unit determines the angular position of the crankshaft and its speed.

According to the frequency of the signals generated by the sensor during the rotation of the synchronization disk mounted on the crankshaft pulley, the control unit determines the number of revolutions of the engine crankshaft, synchronizing the fuel supply by the injectors and the ignition timing with the engine's working process.

If the crankshaft position sensor fails, the engine will not start, because the control unit, without receiving a signal from the sensor, will not turn on the injection and ignition systems.

The knock sensor is located on the top of the engine block on the right side and is secured with a nut and spring washer. 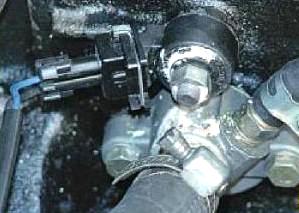 It is used to determine the moment of detonation when the engine is running on gasoline with a lower than required octane number when the engine overheats, the driver chooses the wrong driving mode.

The knock sensor is based on the principle of the piezoelectric effect.

When a piezoelectric element made of cermet is mechanically acted upon, an electric current arises in it.

The mechanical action is carried out by an inertial washer, which perceives the shock wave that occurs in the combustion chamber and engine cylinder during detonation combustion of the fuel mixture.

In this case, a voltage pulse occurs in the sensor, which it transmits to the control unit from the plug.

According to this signal, the control unit corrects the ignition timing until detonation stops.

At the same time, the indicator lamp in the instrument cluster will light up.

The phase sensor is located at the rear of the cylinder head on the left side. 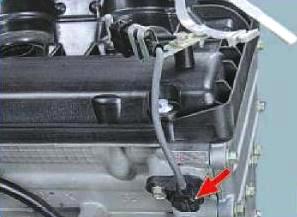 The principle of operation of the sensor is based on the Hall effect.

When a metal plate attached to the camshaft passes by the end of the sensor core, an impulse is generated that allows the control unit to determine the moment the piston of the 1st cylinder is at top dead center during the compression stroke and send an injection signal to the nozzle of this particular cylinder.

Further supply of impulses is carried out by the control unit in accordance with the order of operation of the cylinders laid down in its program.

If the phase sensor fails, the control unit switches to standby mode with fuel supply to all cylinders simultaneously.

At the same time, engine performance is maintained, but fuel consumption is significantly increased. A sensor malfunction is signaled by a warning lamp in the instrument cluster.

An air filter with a dry filter element made of corrugated filter paper is located in the right front of the engine compartment.

Electric fuel pump is a rotor type driven by a DC motor located directly in the fuel tank housing and working in the fuel.

In this regard, there are no seals of moving parts in the pump, and the rubbing surfaces are lubricated by flowing fuel.

A non-return valve installed in the pump prevents fuel from flowing from the high pressure fuel line into the tank after the ignition is turned off.

The electric fuel pump is a non-separable design and must be replaced if it fails.

The fuel filter is installed in the engine compartment above the vacuum brake booster.

Replacing a standard filter with some other, for example, a unified one in a plastic case, is strictly prohibited due to the high fuel pressure in the system.

Crankcase ventilation system of a closed type, forced, acting due to vacuum in the intake piping.

When the engine is idling at low speed and with low loads, when the throttle is closed, crankcase gases are sucked through the hose of the small branch of the system directly into the engine intake pipe and then into the cylinders.

In other modes, the exhaust of crankcase gases is carried out through the hose of the main branch of the system into the throttle and from there into the intake pipeline.

During operation, it is necessary to monitor the tightness of the connection and the cleanliness of the pipelines, since when the crankcase ventilation system is not working, the oil in the engine quickly oxidizes and ages.

Clogging of the system pipelines leads to oil leakage through the oil seals and engine seals due to an excessive increase in the pressure of crankcase gases.

An oxygen concentration sensor (lambda probe) is installed in the downpipe. 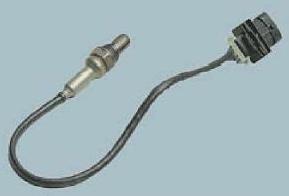 A galvanic cell is located in the metal bulb of the sensor, washed by the exhaust gas flow.

Depending on the oxygen content in the exhaust gases, the combustion of the air-fuel mixture changes the voltage of the sensor signal.

Information from the sensor enters the ECU in the form of low and high level signals.

The block tracking the signal voltage corrects the amount of fuel injected by the injectors.

On vehicles with a ZMZ-40524 engine, a second oxygen concentration sensor (diagnostic sensor) is installed at the outlet of the converter.