According to the manufacturer's recommendation, the accessory drive belt should be replaced after 4 years of operation or after 60 thousand kilometers (whichever comes first)

Vehicles without power steering and without air conditioning

Check the belt tension by pressing your finger on it between the alternator and crankshaft pulleys.

To check the tension, you can use a steelyard scale by pulling a branch of the belt with a hook.

To adjust the belt tension, loosen the bolt securing the generator to the tension bar.

Loosen the bolt securing the generator to the bracket.

Adjust the tension of the belt and tighten the bolt securing the generator to the tension bar to 21 Nm.

Tighten the alternator mounting bolt to the bracket to 44 Nm.

To replace the belt, loosen the belt tension (see above) and remove the belt from the drive pulleys.

Install the new belt and adjust its tension.

In the second case, one drive belt is used, the tension of which is regulated by a tension roller,

On vehicles where the alternator and air conditioning compressor are located on opposite sides of the engine, replace the drive belts in the following order.

Remove the A/C compressor drive belt by cutting it.

Install the belt holder (supplied with the A/C compressor drive belt) on the bottom of the crankshaft pulley.

Slide the belt holder with the belt attached to it along the crankshaft pulley clockwise, as far as the force of the hands allows,

Install a special hook (included in the delivery of the air conditioning compressor drive belt): with one side it clings to the compressor mounting bracket, and the other (more bent) - to the belt.

The hook is installed so that the upper branch of the belt does not come off the air conditioning compressor pulley.

Rotate the crankshaft so that the belt fits over its pulley.

Remove the belt holder and hook. These devices are disposable, after use they can be thrown away.

Turn the crankshaft two turns to get the A/C compressor drive belt in the correct position on the pulleys.

On vehicles where the alternator and A/C compressor are located on the same side of the engine, replace the drive belts in the following order.

Unscrew the two bolts securing the tension roller and remove it

Replace the tensioner every time you change the belt.

Install the new idler without fully tightening its fastening bolts.

Adjust the tension of the drive belt with the adjusting bolt.

The manufacturer recommends checking the belt tension and monitoring it during adjustment using a special strain gauge tester.

In this regard, there is no data on the amount of force when bending a belt branch by a certain size in the technical documentation.

In practice, you can initially approximately estimate the correct tension of the belt according to the "rule of thumb": pressing on the branch of the belt with your thumb and determining the deflection with a ruler.

According to this universal rule, if the distance between the centers of the pulleys is between 180 and 280 mm, the deflection should be approximately 6 mm.

This method can only diagnose excessive belt loosening, so contact the service for an accurate check and adjustment of the tension.

Tighten the tensioner bolts to 21 Nm.

Rotate the crankshaft three full turns to get the belt in the correct position on the pulleys.

Install the parts in the reverse order of removal.

Remove the engine splash guards from the right side. 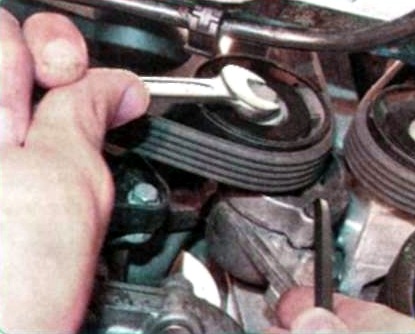 Turn the tensioner roller clockwise with a wrench and lock the tensioner in this position with a pin with a diameter of 6 mm (for example, a hex key). 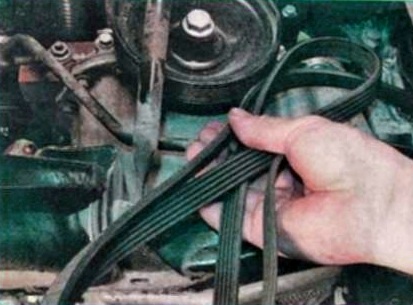 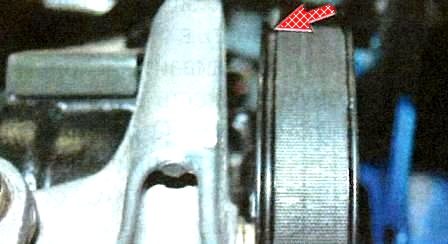 Install a new drive belt. Lay the belt over the pulleys so that the inner groove of the pulleys remains free.

Remove the pin that secured the tensioner.

Rotate the crankshaft three full turns to get the accessory drive belt in the correct position on the pulleys.

Install the parts in the reverse order of removal.