Features of the K-151 carburetor

Upper part - carburetor cover includes an air pipe, divided into two channels, with an air damper in the channel of the first chamber.

The middle part consists of a float and two mixing chambers and is the carburetor body.

The lower part - the throttle body includes mixing pipes with throttle valves of the first and second chambers of the carburetor.

The gasket between the middle and lower parts of the carburetor is sealing and heat-insulating.

Structurally, the carburetor consists of two mixing chambers - the first and second.

Each of the carburetor chambers has its own main dosing system. 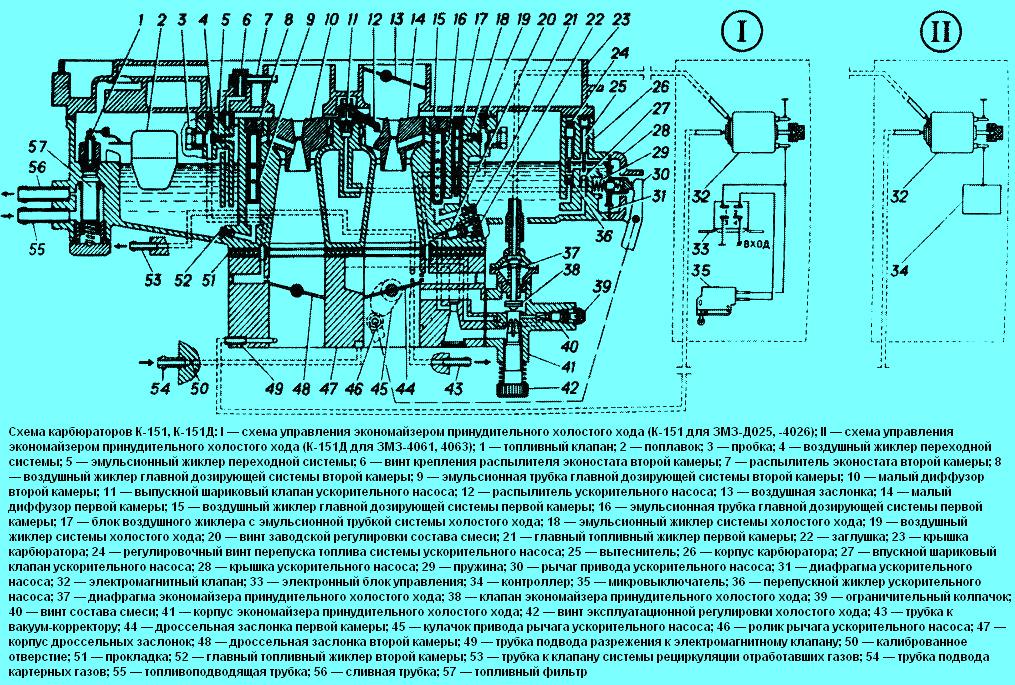 The accelerator pump is a diaphragm type.

An ecostat is provided in the second chamber to enrich the combustible mixture at full load. 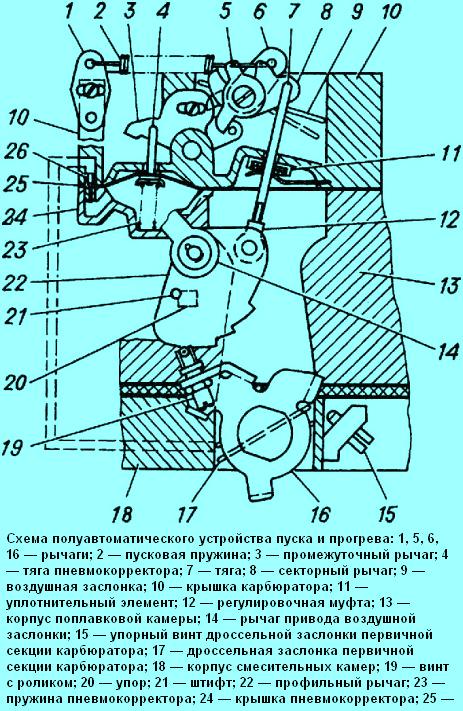 Fig. 2. Scheme of a semi-automatic device for starting and warming up

Cold engine start system (Fig. 2) - semi-automatic type, consists of a pneumatic corrector, a system of levers and an air damper, which is closed by the driver before starting a cold engine using manual drive.

At the moment the engine is started, the pneumatic corrector, using the vacuum that occurs under the carburetor, automatically opens the air damper to the required angle, ensuring stable operation of the engine when warmed up.

When pulling the choke lever, you must press the accelerator pedal.

The fuel cut-off system (forced idle economizer) comes into operation in the forced idle mode when the vehicle is braked by the engine, when there is no need to supply fuel to the engine.

This ensures fuel economy and reduces the emission of toxic substances into the atmosphere.

The system for shutting off the fuel supply of the K-151 carburetor consists of a control unit 33 (see Fig. 1), a microswitch 35 of the solenoid valve 32 and a forced idle economizer.

The microswitch and forced idle economizer are located on the carburetor, the solenoid valve - the control unit - on the front panel of the cab.

The control unit 33 is a device that, depending on the frequency of electrical impulses coming from the ignition coil, controls the solenoid valve 32.

When the accelerator pedal is released, the contacts of the microswitch 35 must be open.

When the accelerator pedal is released and the engine speed is more than 1400 min -1, the control unit does not supply voltage to the solenoid valve, as a result of which atmospheric air enters the forced idle economizer through the channels of the solenoid valve, the valve of which closes the idle channel.

In the event of a malfunction of the fuel cut-off system (the engine does not start or “stalls” when the throttle pedal is released), you must first make sure that the electrical contacts of the system elements are reliable, after which you should sequentially check the operation of the solenoid valve, microswitch and control unit .

To check the solenoid valve and the microswitch it is necessary to disconnect the electrical connector of the control unit, turn on the ignition (do not start the engine!) And from the side of the engine compartment, smoothly open and close several once the throttle valves of the carburetor, and the other - to hold the solenoid valve.

To check the control unit it is necessary to insert the connector into the unit, turn on the ignition, start the engine and warm it up.

Then, from the side of the engine compartment, open the throttle valves about 1/3 of the way with one hand, hold the solenoid valve with the other.

All carburetor systems are connected to a float chamber, the fuel level in which is maintained by float 2 and fuel valve 1 (see Fig. 1).

The main dosing elements of carburetors are given in table. 1.

The primary chamber of any carburetor is easy to identify by the choke.

The choke is at the top of the carburetor diffuser. And which jets are next to this chamber are the jets of the primary chamber.