Replacing the oil seals of the Renault Logan gearbox

The guide block is pressed into the clutch housing.

For pressing out and subsequent pressing of the guide sleeve block, special tools are required, therefore, in case of oil leakage through the input shaft seal, contact the service for its replacement.

The seal of the inner constant velocity joint (CV joint) of the left front wheel drive is installed in the dirt-proof cover of the CV joint.

In case of oil leakage through this stuffing box, remove the CV joint boot and replace the bearing assembly with the stuffing box.

The seals of the inner CV joint of the left front wheel drive and the shank of the differential side gear can be replaced without removing the gearbox from the vehicle, while it is necessary to drain the oil from the gearbox.

You will need: all the tools needed to remove the front wheel drive, as well as a screwdriver, hammer, mandrel.

Mount the vehicle on a pit or lift. 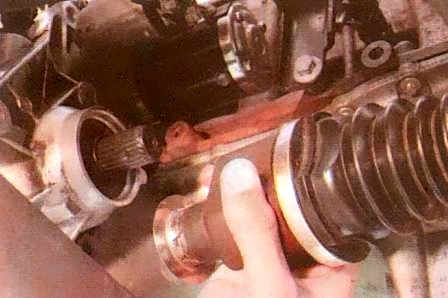 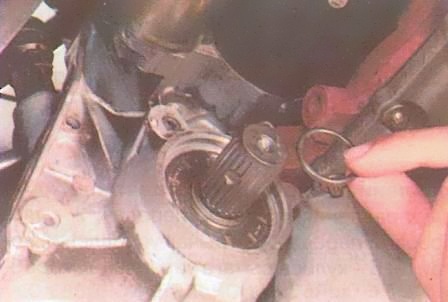 Remove the rubber o-ring from the side gear shank. 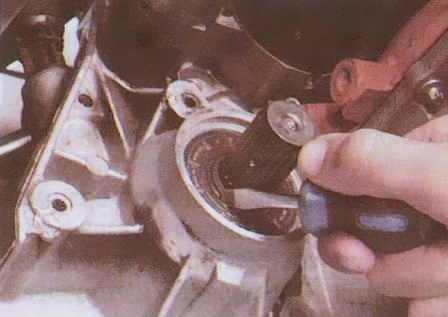 Using a screwdriver, remove the oil seal from its socket in the gearbox housing.

It is quite difficult to pry the oil seal with a screwdriver through the gap between its edge and the side gear shank.

Since the oil seal cannot be reinstalled, it is possible to turn it in the socket with a hammer through the beard on one of the edges of the oil seal, deforming it so that the other edge protrudes beyond the edge of the socket in the gearbox housing.

Then grab the gland by the protruding edge with pliers and remove it from the socket.

Lubricate the seal lip with gear oil and press it with a mandrel of suitable diameter with the seal lip inside the box.

To protect the stuffing box from damage, before installing it, we recommend wrapping the splined end of the shank with a strip of tin or thick aluminum foil. You can also choose a thin-walled sleeve of a suitable diameter for this purpose.

Install the rubber O-ring onto the side gear shank.

Fill the gearbox with oil.