The cab is provided with supply and exhaust ventilation systems

During natural ventilation, air enters the car interior through the lowered door windows, and exits through the slots of the inner panels of the front doors, the sunroof, as well as the ventilation windows on the rear pillars of the sidewalls and the rear windows of the buses 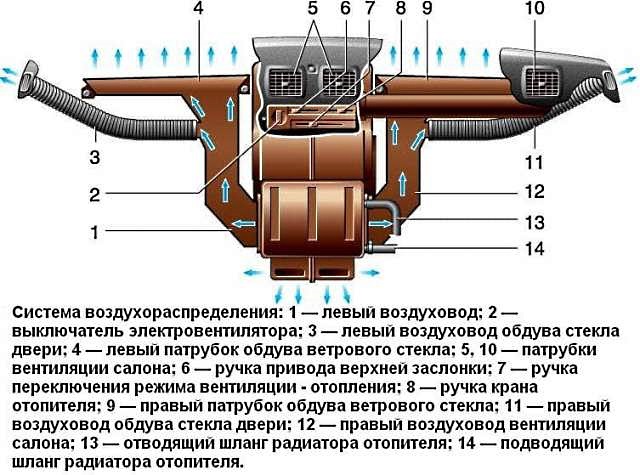 With forced ventilation, closed windows and a sunroof, outside air, without heating, is forced into the cab by a heater fan.

Passing through the heater housing and bypassing its radiator, air enters the passenger compartment.

To do this, move the lower handle on the control panel to the extreme left position and turn on the electric fan.

The direction of air flow through the cabin is regulated by rotary nozzles.

Forced ventilation should be used in hot weather at low speeds and in parking lots.

At speeds above 50 km/h, the passenger compartment is ventilated when the electric fan is off, only due to the high-speed air pressure.

The cabin (salon) is heated with hot air. 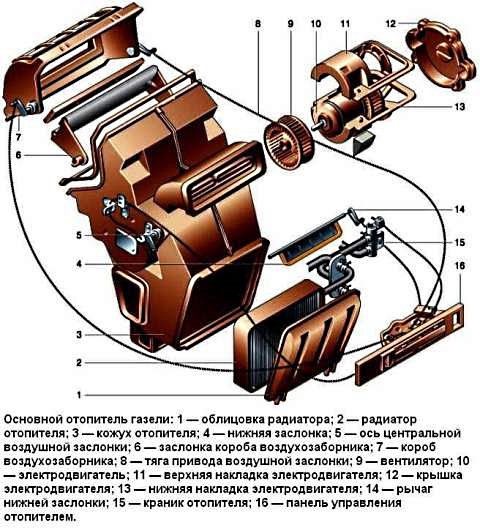 Passing through the heated radiator of the heater (included in the engine cooling system parallel to the main radiator), the air is heated and supplied to the passenger compartment.

When outside air is taken in, it passes through a grill located between the windshield and the hood, abruptly changes direction and separates from rainwater, which drains onto the road through a plastic groove located in the engine compartment.

Further, the air passes through the air intake duct, the heater itself and (depending on the location of the dampers) enters the windshield, door windows, as well as the driver and passenger footwell area.

The heater consists of a plastic casing in which a radiator is installed, two fans mounted on the motor shaft, upper, central and lower dampers and a control panel with three levers and switches.

An additional resistor is installed on the left side of the heater, which provides reduced fan speeds.

Inlet and outlet rubber hoses are suitable for the heater radiator.

Fluid is taken into the radiator with the heater valve open, from the cylinder head, and the outlet is to the pump of the engine cooling system.

To heat the cabin, by moving the right upper and lower levers of the control panel, we open the heater valve, and by moving the dampers we direct the incoming air through the heater radiator.

When the car is moving, air will enter the cab even when the fan is off.

If there is a lack of warm air, as well as in parking lots, turn on the electric fan.

Turn the switch clockwise to select one of the three operating modes of the electric fan.

To increase the efficiency of heating and, especially, to accelerate the heating of the cabin in the cold season, the cabin air is recirculated through the heater radiator.

When the left upper lever of the heater control panel is moved to the extreme right position, the upper damper blocks the intake of outside air into the heater and opens the air intake window from the passenger compartment.

The constant circulation of "salon" air through the heater radiator contributes to its intensive heating.

Redistribution of air flows in the cabin is carried out by the lower lever of the heater control panel.

When the handle is in the extreme left position, the air supply to the heater radiator is blocked and only the passenger compartment is ventilated.

In the middle position, air is supplied to the heating of the windshield and door windows.

In the far right, the air is distributed similarly to the middle position of the handle, plus it additionally enters the driver and passenger foot area.

The upper right lever of the heater control panel is connected to the heater valve and regulates the amount of fluid entering the heater radiator.

When the lever is in the extreme right position, the valve is fully open.

An additional heater has been installed in the heating system of cars with two rows of seats, buses and ambulances.

When its electric fan is turned on, the passenger compartment air circulates through the auxiliary heater radiator.

This ensures a high intensity of heating of the cabin (interior).

The auxiliary heater fan has a minimum and maximum speed. 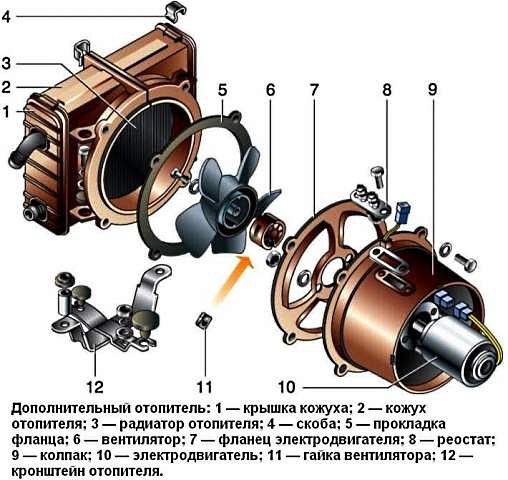 The second radiator causes a decrease in the circulation rate of the liquid in the heating system.

Therefore, an electric pump is installed together with the additional heater.

It increases the fluid flow in the system, which improves the heating of the air passing through the heater radiators.

The electric pump is included in the drain line of the heating system and is installed in the engine compartment on the right side member.

It is recommended to use the electric pump in the parking lot and at a low crankshaft speed (driving speed up to 50 km/h).

To heat the interior of medical modification minibuses, an independent flame-type heater was additionally installed, which runs on gasoline supplied from the vehicle tank.

The heater can be operated while stationary and in motion, regardless of engine operation.